Wait, it's not Wednesday today? Are you sure?

Well, with more cyclists than ever taking to the streets the Wall Street Journal wants to remind us all that whatever happens to us is our fault, and you can read all about it in the Bike Forecast: 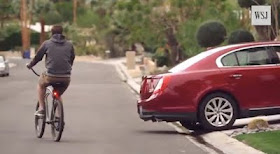 I've since gotten the text of the accompanying article, and guess what it's fixated on?

Dr. Cook bikes to work from a Boston suburb, he says, enlisting a helmet, flashing lights and “obnoxiously” bright clothing to stay safe. He thinks Boston has tried to make cycling safe but worries about what lies ahead. Last year, at his initiative, Beth Israel Deaconess hosted a Bike Safety Day, where he and other trauma surgeons buttonholed people entering or leaving the hospital, handed out flashing reflectors and emphasized measures such as wearing a helmet and being visible while cycling.

Fun foam party hats and flashing lights for everybody!!!

But of course it's a cycling article, so it doesn't have to be accurate:

An article about cycling & health which quotes emergency docs but no epidemiologists is largely missing the point https://t.co/Ckb4360X05
— Peter Walker (@peterwalker99) October 12, 2017

This is not to debate the efficacy of helmets, far from it.  Indeed, I'd argue that it's the most effective tool ever devised for the suppression of cycling.  Wearing one's just inconvenient enough for most people not to wanna bother, so when you factor in all the shaming it's not surprising that so many people ultimately arrive at the same conclusion:

Speaking of accessories, here's a nifty one I saw on the Kickstarter:

Of course this is not strictly speaking a full fender, and it does leave a void in the bicycle's scranial region:

Yes, bicycles do have scranuses: 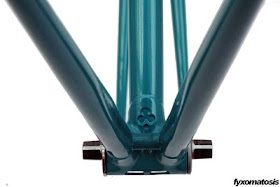 Nevertheless, it does look rather handy, and potentially quite a bit tidier than other clip-on fender solutions, like the ones I've been using out of laziness: 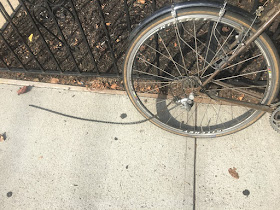 Oh, and I suppose you noticed I've got a little extra slack in my chain.  Well, here's what happened: since putting this bike together maybe five or so years ago and traveling the world with it I've done virtually nothing in the way of maintenance save for changing the brake pads and squirting some lube on the chain.  I've also never cleaned any part of it.  Well, last time I went to ride it I noticed some stiff links (okay, a lot of stiff links), at which point I did what any sensible person would do, which is to squirt lube onto them until the chain passed through the derailleur again.

Did I have a perfectly good chain sitting in a drawer as I did this?

Did I want to spend the extra five minutes it would have taken to install it?

Anyway, all was well until a few blocks into my ride, at which point I started up again at a green light and SNAP!

While not entirely unexpected I was nevertheless surprised, but fortunately my scranus was spared a high-velocity encounter with my top tube.  This I attribute in part to my expert bike-handling skills, and also to the fact that I was using flat pedals, and so I was spared the indignity of a sudden release.  Anyway, after the chain ass-ploded I removed the broken link and reattached it, and you'd better believe I'd have called it good indefinitely if in the process I didn't notice at least one other cracked link waiting for a second scranial assassination attempt.

Therefore, at my earliest opportunity I stopped at a bike shop and purchased and installed a new chain, and all was once again right with the world--until the next thing breaks, which given the state of that bike could be absolutely anything: 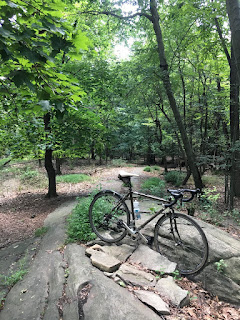 I'm quite fortunate the chain didn't decide to break the day I took the bike to the mountain bike trails.

Moving on, a reader has forwarded me more evidence that the bicycle is humanity's savior: 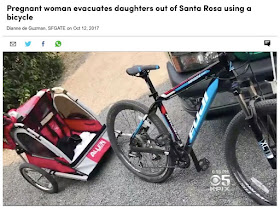 Charity Ruiz, her husband and two daughters were leaving their Coffey Park neighborhood by car when they were stopped by the exodus of neighbors also trying to leave the area.

Panicked by the flames, Ruiz instead decided to instead use a bicycle to get out of the area. She used a family bicycle hooked up to a toddler trailer to get her two children out, with Ruiz pedaling — despite being due the following week.

If you needed proof that Americans are not fit for survival consider that when confronted with calamity the very first thing we do is get in our cars and drive.  This generally has two outcomes: 1) We sit in traffic with all the other schmucks; 2) Whatever the calamity is soon engulfs us: 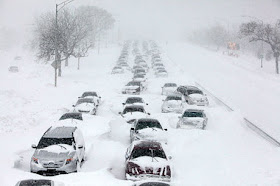 Certainly in New York we've weathered everything from transit strikes to blackouts to hurricanes to terror attacks, and in each and every case the bicycle has proved itself indispensable: 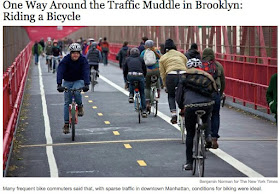 There is only one downside, which is that it's only a matter of time before disaster tourist Lucas Brunelle "drops" a video of himself riding through the smoke and flames of Napa and Sonoma: 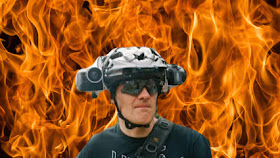