Yesterday I mentioned how a bunch of hurt-in-the-butt suspension bicycle owners on Facebook were aghast at my suggestion that it's possible to ride a rigid bike, (I guess your butt gets very sensitive when you coddle it with suspension all the time), and now it appears that Bicycling magazine's Facebook is under siege by a cadre of "bike industry farts:"

Evidently these are the "bike industry farts" in question:

And these are the Bicycling staffers moving the magazine and society forward:

Anyway, picking your way through Facebook comments is about as pleasant as pulling thorns out of your scranus after falling into a briar patch, but as far as I can tell what happened was the farts took issue with this article: 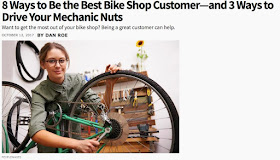 Upon which I cast my expertly critical eye and found to be basically sound, inasmuch as it's essentially a bunch of people from a bunch of bike shops offering their perspective on their customers: 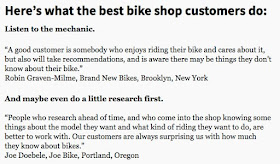 Considering this is the same magazine that blew the lid off the poop doping phenomenon, I could find little to get upset about.  Plus, I'd argue a "listicle" about how to shop in a bike shop is valid for two reasons:

1) Even in our age of kinder, gentler bike shops, walking into one can still be a stressful proposition.  Indeed, even as a "bike industry fart" myself (or at least a bike media industry fart) I still feel the same way walking into a bike shop as I do when I go to the doctor in that I know I'm about to be shamed for something;

2) It's 2017 and everyone shops online now, so walking into an actual store is becoming positively archaic.  It's the retail equivalent of installing tubulars, so in this sense alone a primer is probably warranted.

Evidently however the patriarchy does not share my opinion, and while I confess it's not productive to make inferences based solely on physical appearance I must say that I've never in my life seen four people who look more like they should be wearing helmet mirrors: 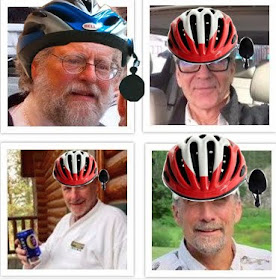 Anyway, as for the nature of their objections, they seemed to involve speculation about the current staff:

Tom Petrie Ray Keener, Bicycling (or, as I call it "11 ways to count to 10" because of their insufferable and incessant listicles) is hardly about bicycling. It appears mainly written by Manhattan-based eating-disordered non-cyclists who couldn't get a job at "Seventeen" magazine. With a few notable exceptions (e.g., Matt Phillips, Patrick Brady) it's an embarrassment. I recently unsubscribed. I couldn't take it any longer.

(Youv'e got to love the characterization of a magazine staff based in Emmaus, PA as a bunch of urban sophisticates.)

Distaste for the accompanying photo:

John S. Allen Just what is supportive of young females in bicycling about showing one in a jaw-droppingly stupid pose, grinding chain dirt into the armpit of her shirt? Emily O'Brien, what do you think of this please?

And accusations of ageism and reverse racism and sexism:

John Schubert Matt — you'd be surprised at how many grey-haired guys know useful information that 20-somethings don't know. Not all of us are here to defend our own egos.
And really, if sexism is wrong in discriminating against young women, it’s wrong in discriminating against old men.
Here’s a story about age and gender discrimination: Some years ago, I participated in a review of some bicycle facilities in New York. We found that one facility, if you obeyed the traffic signals, would only allow an average speed of six mph (and that’s in uncontested traffic conditions). That’s unlikely to generate much compliance with the signals. We found other stuff, good and bad. We reported on it.
So a few years after that, I found that some know-it-all had decided we were all irrelevant because we were old white guys. And published a picture of us, comparing it with a picture of Mia Birk of Alta Planning. And said how much greater Mia is, because she’s an attractive younger female, and we weren’t.
Birk is known for defending bicycle facilities that cause bicyclists to get crushed underneath turning trucks whose drivers never saw them. (Hint: Google “truck bicycle blind spot” for some important information.) Most of the people saying, “No, don’t build this crap” are old white guys.
But our viewpoints should be ignored, because we’re old and white.

All because of a short piece on how to walk into a bike shop and not act like a douchebag.

We are clearly living in extraordinarily petty times.

I mean sure, it's kind of a silly photo since nobody works on a bike with the chainring under their armpits: 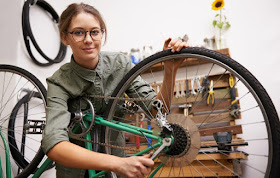 But inasmuch as it's clearly a stock photo who really cares?

Plus, it doesn't really obviate anything in the story.  Maybe if it was an article entitled "How To Work On Your Bike In The Proper Fashion And Without Getting Grease In Your Armpit" then the outrage would be warranted.

Anyway, as someone who has spent most of his blogging career mocking the behavior of people younger than him, I can assure that it's best to surrender to the younger generation before you devolve completely into Old Man Yelling At Cloud:* 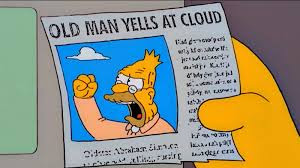 *(Unless you happen to have my razor sharp wit and finely honed writing skills, of course, but how many people do?)

None of this precludes sharing with people the benefit of your experience, but by the time you've had a colonoscopy you should probably learn to temper that with a bit of open-mindedness, because apart from a few absolute truths our culture is fluid, and if you don't learn how to flow along with it you're nothing but a stick in the mud.

Hey, that's not to say I don't make fun of listicles, because I totally do:

Then again I also write my share listicles so I feel perfectly entitled.

And while we're on the subject of bike storage, I should mention that the only bike I store inside is my Brompton, but only because when folded it is roughly the size of a large cat.  This is because I hate living with bikes inside my home almost as much as I hate living with my cat--and believe me, when it comes to keeping bikes inside I've paid my dues.  Yep, I've done it all:

At my absolute worst I not only had bikes both on hooks and leaning against wall, but I also had an off-site storage unit and was withdrawing and depositing bicycles on a seasonal basis.  Storage space is by far the dumbest thing in the world you can buy, because you will never, ever get rid of it.  If you're thinking of renting a storage space do yourself a favor and take up smoking instead, it's much easier to kick.

And now you have the benefit of my considerable years.  If you'll excuse me, I'm gonna toss my bike under my armpit and service the drivetrain.