Sorry, but I couldn't let this one go.

I realize I said I was out of the office until Monday, February 6th, but that was before I saw this story on NY1: 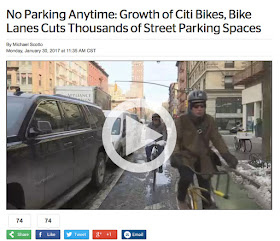 Before I begin, I should say that I enjoy NY1, and like many households in this city we begin our weekday mornings with anchorperson and affable Canadian (is there any other kind?) Pat Kiernan.  However, this particular story is just...oy.  [Winces and massages temples.]  And it begins with this guy: 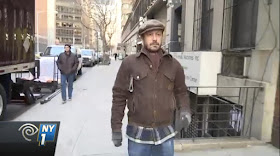 For 13 years, Ben Bowman has taken part in a ritual all too familiar to city car owners who park on the street. Twice a week, he moves his Jeep from one side of West 68th St. to the other to make way for street cleaners.

W. 68th Street is in the vicinity of Lincoln Center and numerous other cultural institutions, educational facilities, and famous landmarks.  If you live on W. 68th Street you can walk to everything from the Metropolitan Opera to the Dakota to an Imax movie theater to a Lowe's Home Improvement to a Trader fucking Joe's.  It is also extremely well served by public transit should you need to leave the neighborhood.  Given this, it probably won't surprise you to learn that free street parking is at a premium.  Yet, despite all this, Ben Bowman opts to deal with the hassle of keeping not just any car but this dumbass Jeep with a fucking light bar on the roof because you need that in the middle of Manhattan: 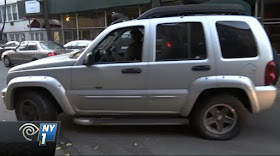 Hey, I'm sure Ben Bowman has his reasons for wasting two days a week amid this embarrassment of cultural riches in order to move a soccer mom car on steroids from one side of the street to the other.  Maybe he's an avid outdoorsman who makes frequent trips to the country.  Maybe his job requires him to haul lots of equipment at a moment's notice.  Or maybe he just likes the damn thing.  And I wouldn't care, either, except that it's turning him into a raving fucking lunatic: 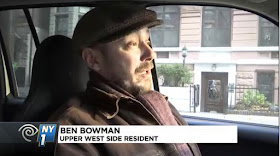 With space at a premium, things can get ugly, such as the time another driver snuck into a spot Bowman had been waiting to take.

"I went to my truck and pulled out my tire iron and stood by his door, and I said 'You can have this spot, but you're taking a beating when you get out."

Yes, here's Ben Bowman, Upper West Side resident, inhabitant of one of the most rarefied and privileged bubbles in the United States and therefore the world, explaining to a TV camera that he threatened to assault somebody with a tire iron for taking the parking space that he doesn't even fucking own.

Yet incredibly this is not a news story about mental illness, or even about how Ben Bowman should just move the hell upstate already.  It's a story about how hard it is for unfortunate souls such as Ben Bowman to find free car storage on a small island with excellent 24-hour mass transit that also happens to be the most densely populated county in the United States:

Drivers say tensions and the time it takes to find a space have been increasing since the city began eliminating parking spaces to install Citi Bike stations and dedicated bike lanes.

Here, let me fix that for you:

Drivers say tensions and the time it takes to find a space have been increasing since the city began eliminating parking spaces to install Citi Bike stations and dedicated bike lanes.

In Manhattan alone, the city has eliminated at least 2,330 parking spaces south of 125th St. to accommodate bike lanes and bike-sharing stations, according to city records obtained by NY1 nine months after filing a request under the Freedom of Information Law.

I like how they make it sound as though they've uncovered a massive conspiracy and not simply the city's well-documented efforts to keep its citizens safe and make it easier for people to get around. 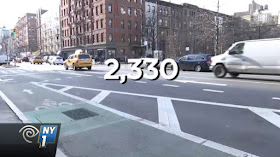 What a tragedy!  2,330 parking spaces gone, never to return!  Lost in the mists of time, like the Lenape Indians and the verdant forests and sparkling streams that once covered this isle!  Yeah, it does sound like a lot of parking spaces--until you consider that the population of Manhattan below 125th Street is approximately 1,039,000, which means this represents a loss of approximately .002 parking spots per person.

But if you don't feel bad for people like Ben Bowman, perhaps you'll feel bad for the people who deliver their appliances:

Car owners aren't alone in suffering.  The growth of bike lanes has made delivery work even more challenging.  These guys had to double-park on Columbus and walk a half-block to deliver a stove and refrigerator. 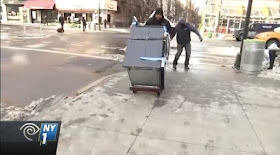 Okay, wait a minute: if the bike lane has made this job more challenging then why did they end up parking on Columbus, which is the street with the bike lane on it?  Why didn't they just park in front of the delivery address?  Oh, I dunno, maybe because of the giant truck unloading a Dumpster?!? 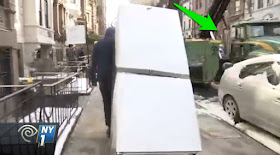 Officials say that with the population growing, it's essential to get people out of cars and onto bikes. The city's transportation commissioner, Polly Trottenberg, says cars still rule the streets.

"We dedicate about 95 percent of (the streets) to automobiles," Trottenberg said, "and actually only about 5 percent to buses and cycles. And yet buses and cycles are the way we are going to carry the most people."

That's right.  And check out the Smugerati.  See how they're smiling as they roll over the graves of all those dead parking spaces?  (Actually the parking spaces are still there and have just been moved over a bit but we're not supposed to know that.)  They don't look like they want to bash anybody with a tire iron, do they? 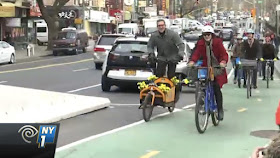 No they don't.  But it's important to remember that in New York City anybody who rides a bike is a wealthy elitist (except for food delivery people, but they don't count), whereas anybody who drives a car is "middle class:" 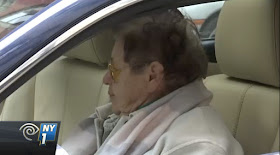 Yeah, in 1970 there was only one area code for the whole city too, and you could smoke at the doctor's office while eating fondue in the waiting room.  But you know what?  Things have a way of changing over the course of forty-seven years.  Speaking of change, someone should tell Ms. Perez tha they just opened up a brand new subway line right in her neighborhood.  In fact, between all the trains and the buses I don't think there's a more accessible neighborhood than the East 80s in the entire country: 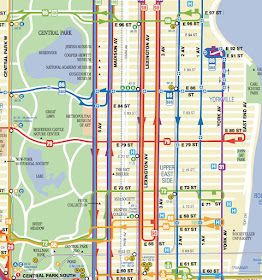 And I don't mean to be hard on Ms. Perez, who is undoubtedly a lovely person who is simply used to doing things her own way in her own neighborhood.  But to blame bike lanes because it's harder to park on the Upper East Side in 2017 than it was in 1970 is more than a little unfair:

"It's worse than ever. It's been worse since they put the bike lanes in."

I'm gong to go ahead and say it's the latter, and that we need the bike lanes because it's the only mode of private surface transportation left that's got any long-term viability.

"It's a hindrance to expect that's it your constitutional right to park for free on every street in New York City. That can't happen."

Unfortunately, Americans have a poor understanding on their constitutional rights, which explains everything from our willingness to bludgeon our neighbors with tire irons over public street space to our current president.  Also, good, honest, salt-of-the-earth middle-class people who drive cars in Manhattan resent being reminded of this by jet-setting bicycling advocates with swashbuckling mustaches.

And finally, the article goes out in a crescendo of irony: 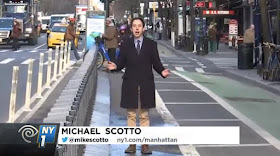 "This Citi Bike station on Columbus Avenue extends an entire block.  It holds 67 bikes but at the expense of about nine cars."

Nine cars.  Nine measly cars!  Cars owned by crowbar-wielding psychopaths like Ben Bowman who only drive them back and forth across the street!  Actually, that's not even true.  It's metered parking on Columbus, which means it wasn't even long-term parking for those decent hard-working middle-class New Yorkers, it was just a little extra coin for the city from the unlucky schmucks who couldn't find free parking.  Meanwhile, the Citi Bike station now holds sixty-seven bikes that anybody can use--and they are using them, judging from the fact that the station is at that moment almost completely empty.

Seems to me the city's not losing parking spaces, it's gaining them.

I really hope he addresses that in Part Two, but I ain't exactly holding my breath.

And with that, I resume my absence, and I'll see you back here on Monday, February 6th with regular updates. 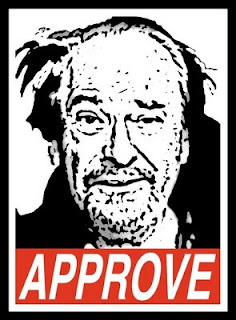