Put this in your bottom bracket and inflate it.

Greetings from New York City, the best cycling city in America according to Bicycling magazine.

As everybody knows, Bicycling's best city prize is the kiss of death--just ask Portland!

But this is New York City--Home Of The Whopper™--and we're not content to just rest on our laurels in this town.  No, you can be assured that the NYPD is working its hardest to make sure we remain in the Number One slot.  And how are they doing it?  By not working! 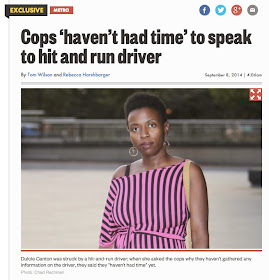 Shortly after the Aug. 7 crash in Brooklyn, witnesses not only gave cops the car’s plate number but told them where it was parked, about two blocks away.

When she failed to hear from the cops, she called “and the detective told me he would contact the [car] owner if he had time,” said victim Dulcie Canton, 38, who sells high-end Dutch bikes at a Tribeca shop.

Hey, look, in defense of the police, it's not like they have any evidence or anything.  All they have are witnesses, the car's license plate number, the identity of the owner (Richard Rivera Jr., 31), and a video of the incident: 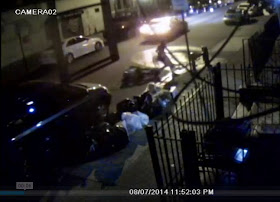 Naturally, the victim's lawyer is outraged:

The video is indeed horrible--and quite damning, for it proves the victim is guilty of riding a bicycle in New York City.  In light of that, the victim's lucky she's not in jail.

Anyway, in the meantime, the cops ain't doing shit, and they ain't saying shit neither:

Meanwhile, he said police haven’t even contacted the owner of the surveillance video, adding that despite numerous letters to the precinct, he hasn’t even been able to get cops to interview Rivera.

And should Rivera's day in court ever come, he's got a bulletproof defense:

A woman answering the door at Rivera’s home disputed the accusation, saying, “I bet the lady don’t even know what color the car was.”

And that's how you reach number one: 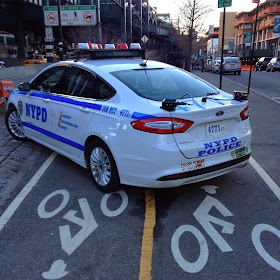 I don't think I'll ever understand how New York City won this.  Similarly, I don't understand how Bicycling considers this to be a "great bicycling tattoo:" 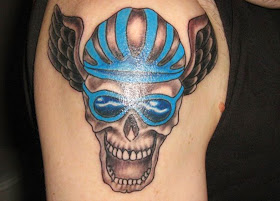 Then again, you can make a pretty strong argument that there's no such thing as a great tattoo, for in the end only their comic value endures: 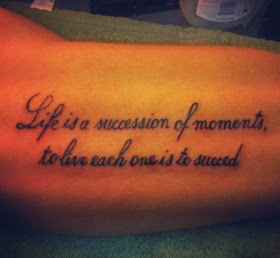 Speaking of life in America's greatest cycling city, yesterday afternoon I was in pedestrian mode when I encountered a procession of numbered Freds: 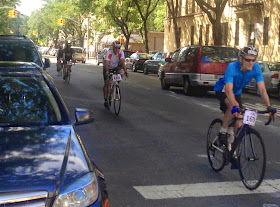 My first thought was that some city councilperson had finally succeeded in implementing some kind of bicycle licensing scheme, but it turned out to be the New York City Century making its final swing through the Bronx: 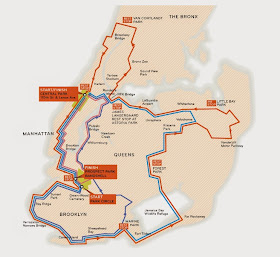 I might have hung around and cheered them on, but I was late for my appointment to have my tattoo fixed: 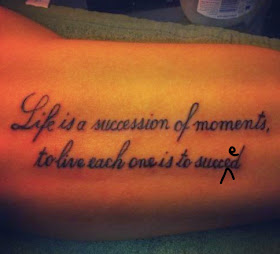 Unfortunatly they refused to do the work for free, because somehow their under the impresion the misteak was my fault.

I even reminded them I was a published author but they remained unconvinced: 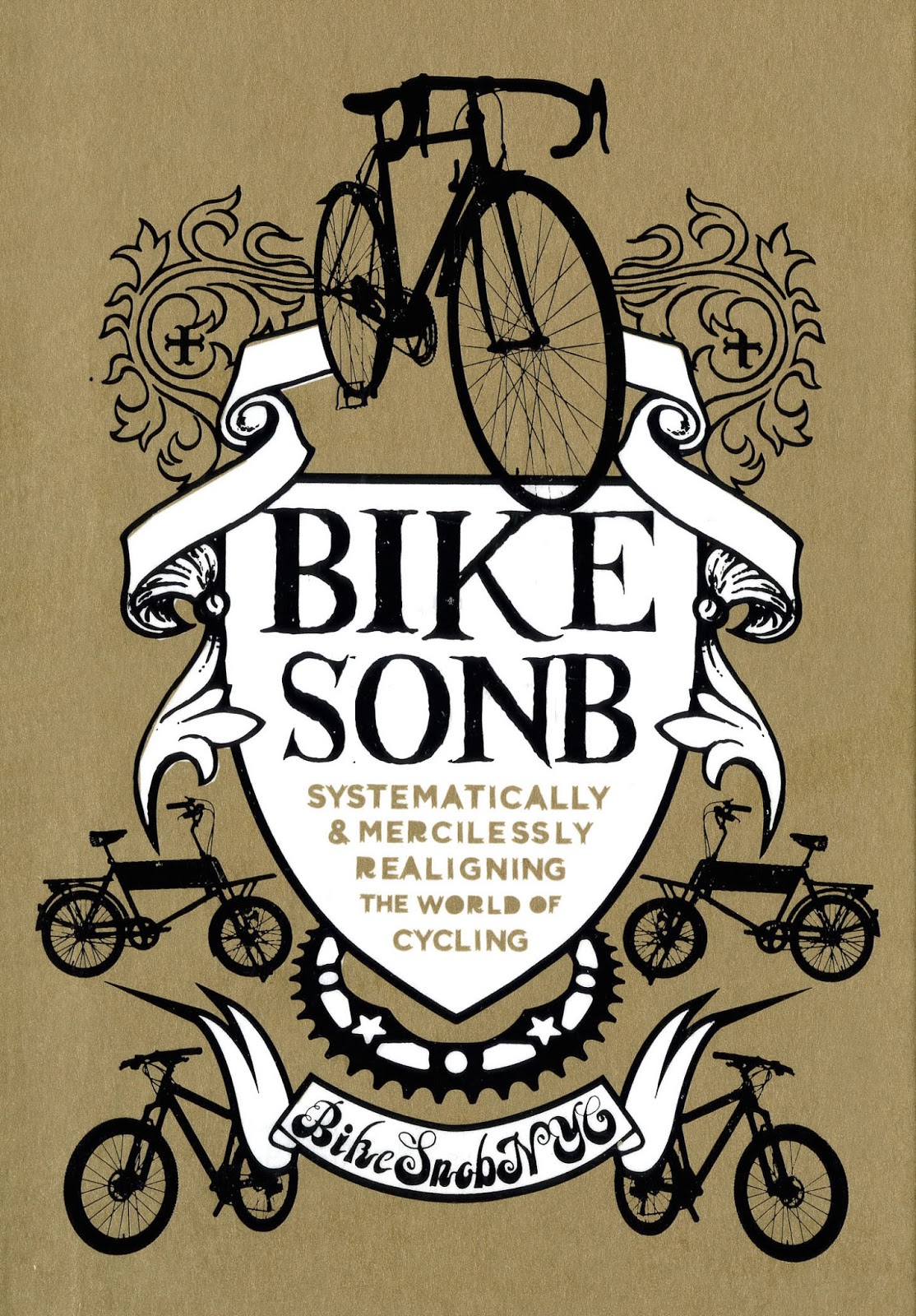 All the stuff needed to repair a tire hangs off your bike, making it look ugly and un-aerodynamic.

To which I reply:

"Are you fucking kidding me?  You think that bike's ugly because of the pump?!?" 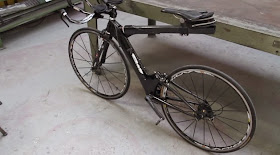 By way of proving their "point," they then show this infernal bicycle without the frame pump or the saddlebag, but--surprise!--it's remains just as ugly: 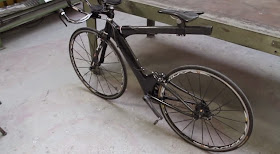 Taking the pump off this thing is the futility equivalent of the person sitting next to you on the bus soiling himself and then popping a Tic Tac.

As for the "pump," it shouldn't surprise you at all to learn it's not one: 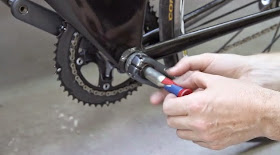 Yeah, what you got there is a Co2 inflator, and once it's outta gas you can "pump" it all you want and it ain't gonna do shit.  Co2 inflators need to be banned immediately because they give Freds a false sense of security, and the last thing Freds should ever feel is secure.  See, what happens is Fred packs his Co2 inflator and thinks he's all set, but when he flats he botches the inflation and uselessly expels all the gas without inflating the tire like a john ejaculating prematurely on a prostitute's thigh--or, if he does manage to actually inflate the tube, he fails to remove whatever caused the puncture from the tire and then flats again immediately.  It is at this point that Fred stops someone like me who suffers from the twin curses of "humanity" and "personal responsibility," for I then proceed to fix the flat for him using the pump and patches I always carry, all the while secretly fantasizing about gauging his eyes out with a pair of tire levers.

Speaking of tire levers, it stands to reason that the inventor of this "pump" has also attempted to reinvent that piece of equipment too: 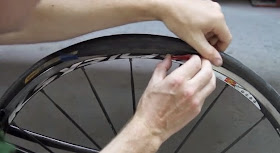 Look at these stupid fakakta pieces of garbage.  Seriously, why bother?  Is there a more perfect tool than the Park nylon tire lever? 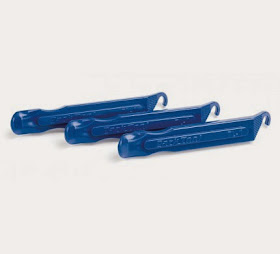 I'm sure the people who invented the CrankPump think it's too long, in which case I suggest they go shove it up their bottom bracket.

And if nothing else, never ever buy a cycling product from someone who fixes a flat like this: 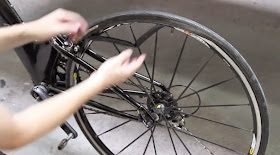 Sure, if you're patching a Dutch bike tube and you've got a fender, a coaster brake, and an internally-geared hub to deal with, fine.  Fish out the bad section of tube and patch it.  But if you can't open a quick release and repair or replace the tube on a racing bike like a grownup then you should not be in the flat repair tool business.

Lastly, here's a reminder to refrain from riding your bicycle on the subway, and to be careful with your nuts:

What's eating Gilbert Grape? - w4m (Rockaways)
My friend and I met you at Surf Club in the Rockaways this past Saturday night. We were astounded by how much you look like Leo Dicaprio but you've heard it before. You even slurringly, accurately described yourself as Leo from the Gilbert Grape era. Needless to say I was attracted. Even when you started drinking my drink, even when your nuts started popping out from the bottom of your short shorts. But between your hot body, your witty banter, your ability to speak eloquent French, and your Leo-like baby face, I looked passed the dangling dinglers and I started getting pretty into you. My friend disappeared for a while and we made out in a corner. We eventually decided to leave and go home together. But our subway ride was cut short when a cop pulled you off the A train!

I'm not entirely sure why you got popped. Yes, you were pretty drunk. Yes, you were sitting on top of the seat dividers. Yes, you tried riding my friend's bike inside the moving train car. Yes, your balls revealed themselves again and again. And when the cop called you off, the train doors closed too quickly for us to realize was happening. My friend and I were still on the train as it left the station without you!

I was super bummed. My hookup dream was deferred. The entire train was a little stunned that it had happened. Many people had seen your privates popping out, and many people were chiming in on why you might've been stopped by the cops. Many people were confused why we were putting up with your antics. But the truth is, despite it all, you were charming.

It seemed like you'd been having a rough couple of days - getting fired on Friday afternoon and getting in a bar fight Friday night. Getting pulled off the subway in a random part of Queens, for who-knows-what, instead of going home with moi, hopefully was the last misfortune, and you've gotten yourself a little straightened out, or at least into a pair of underwear. I hope you made it home without too much trouble.

If you see this Kevin, I'd love to see you and your short shorts again sometime!

Looks like Gilbert's grapes got him into some trouble.