The Indignity of Commuting by Bicycle: Feared in the Media, Ignored In Real Life

Earlier this week I mentioned a local news story about the umpteenth NYPD bicycle crackdown, which contained the following quote:

"We should be able to follow the same rules a motorcycle, as a car, because we're still on wheels. So I do believe in cracking down on that," said one bicyclist.

Then there was this one:

"I think it's a really dangerous city for bicyclists. I wonder what the numbers are at the emergency room every day. When I'm driving I almost hit one almost all the time because you can't see them," said one city driver.

Obviously you are legally blind, not to mention legally stupid, and therefore should not be allowed to drive.  You've got to love a society in which people feel perfectly comfortable admitting to television reporters that they nearly kill someone every time they get behind the wheel of a car--though his vision's so bad he probably thought the microphone was a Taco Bell A.M. Crunchwrap®.  By the way, here is what he looks like: 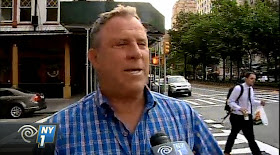 If you see this man, I recommend forcing him to stop, taking his car keys, and throwing them down a storm drain.

What's most frustrating about this "crackdown" is that the NYPD claim to be ticketing cyclists in order to protect them, yet if the state would simply revoke this one guy's license it would probably save more lives than a thousand ticket blitzes. 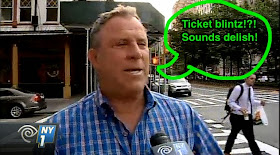 No, that said blitz, Mr. Magoo.

Someone better put a boot on this guy's Buick, and fast.

My favorite though is when New Yorkers complain about the threat cyclists pose to pedestrians, and between newspaper editorials and Internet comments you'd think that it was cyclists and not drivers killing hundreds of people a year.  This isn't to condone the sort of reckless cycling that threatens pedestrians, and if I said I'm not occasionally tempted to kick the front wheel out from some crosswalk-bombing douchebag I'd be lying.  Still, let's get serious here: if cyclists were the terrors some people make them out to be, would our bike lanes look like this? 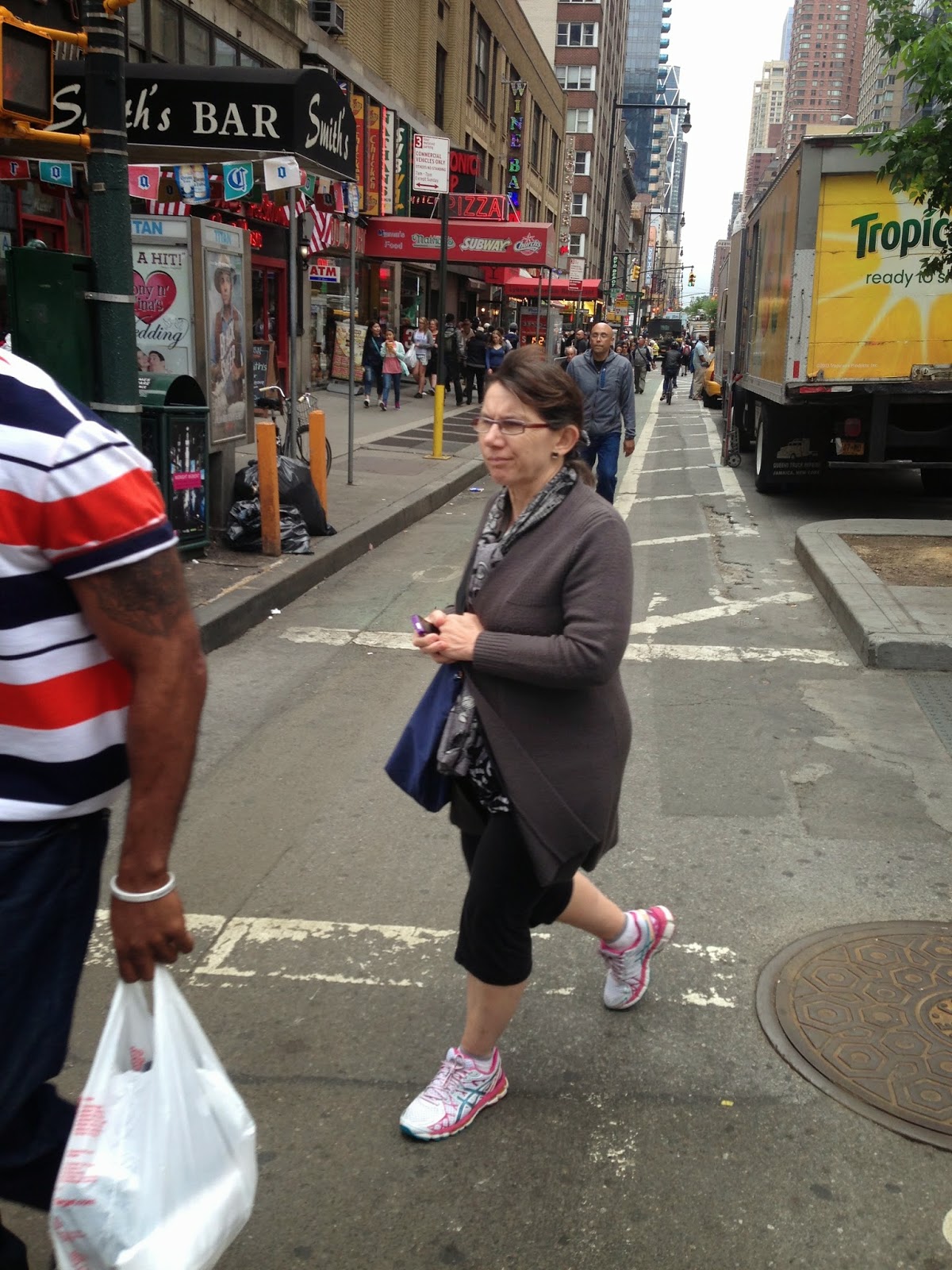 I took the following photos yesterday from a Citi Bike along the "protected" bike lane on 8th Avenue, and as you can see, the expressions on these peoples' faces as they stroll right down the middle of it are of abject terror: 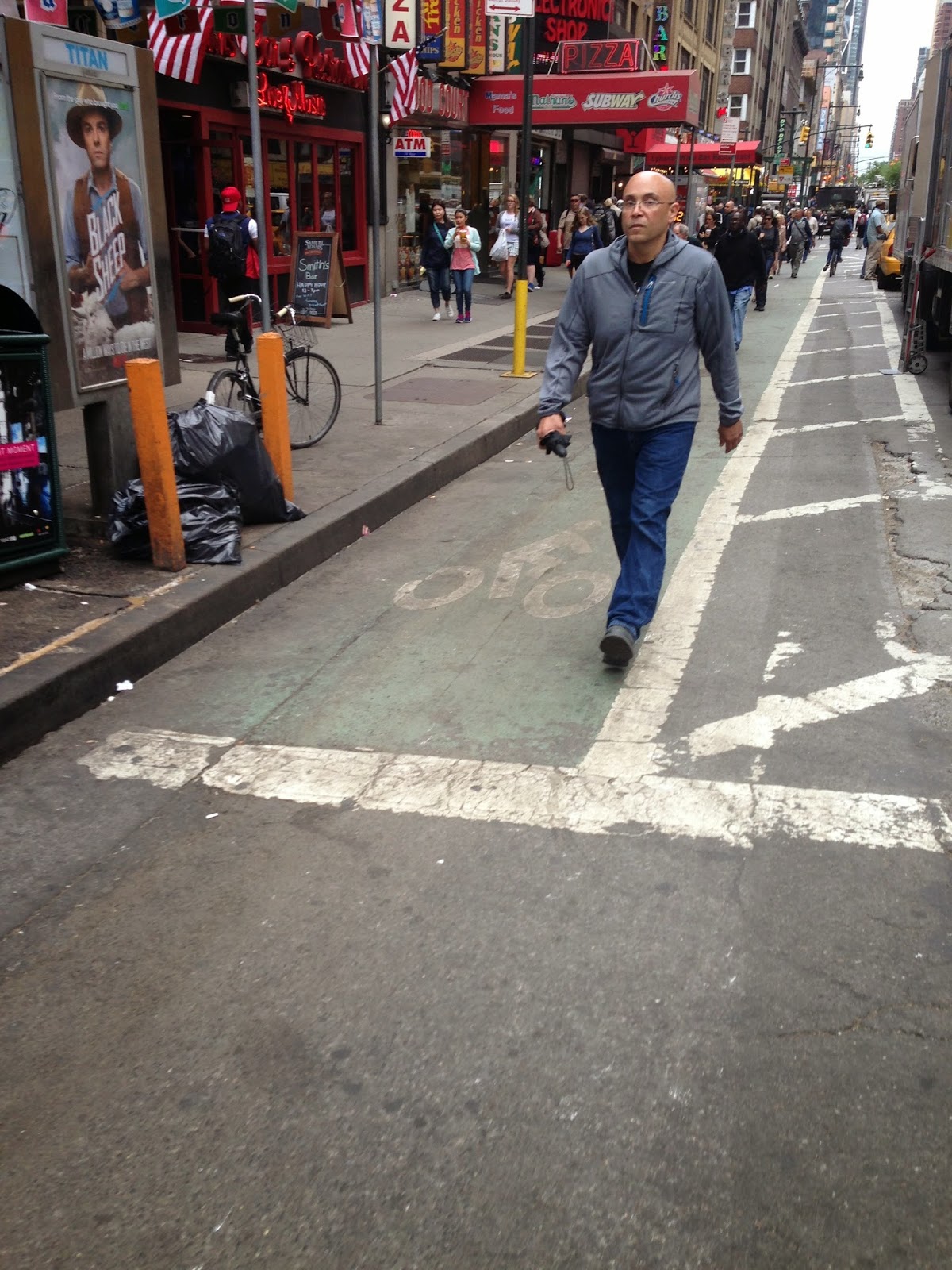 Clearly he is deeply frightened of the two-wheeled menace heading straight towards him, because he does everything short of say "Fuck you, just go around me, asshole:" 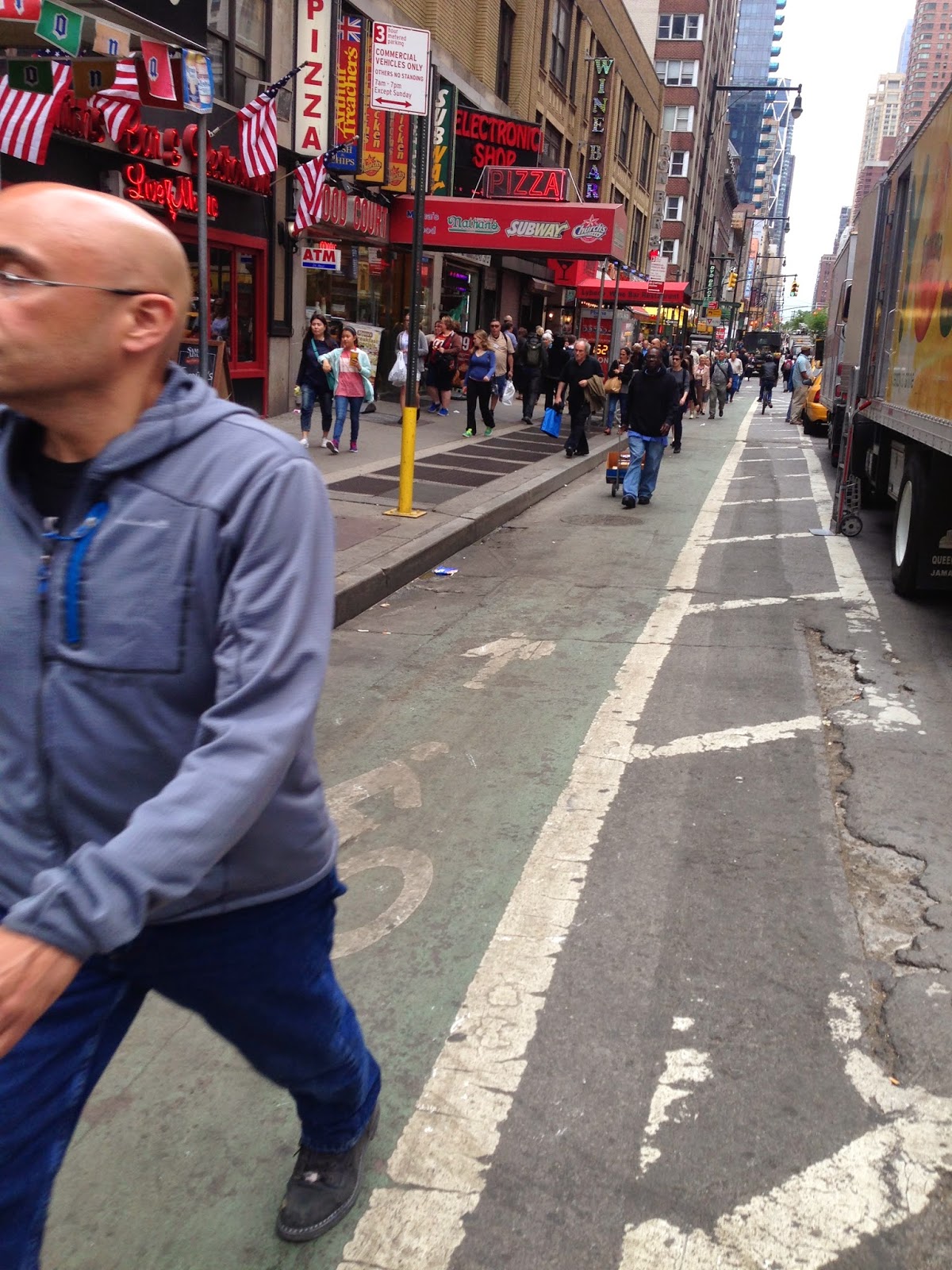 Next up was this guy, whose beleaguered posture says, "Yeah, I'm in the bike lane.  This hand truck has wheels too, you got a problem with that?" 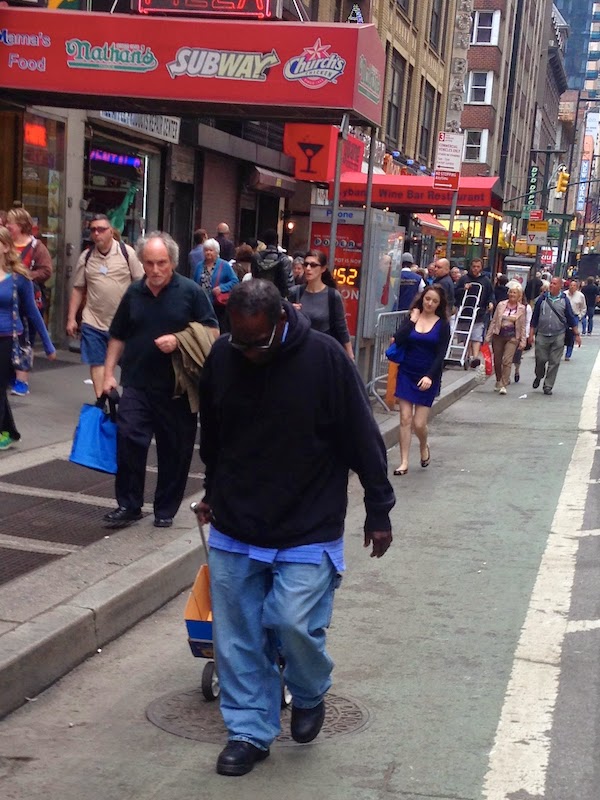 This bike lane interloper doesn't exactly look like she's staring death in the face, either.  Rather, it looks like she's composing a "Craigslist Missed Connection:" 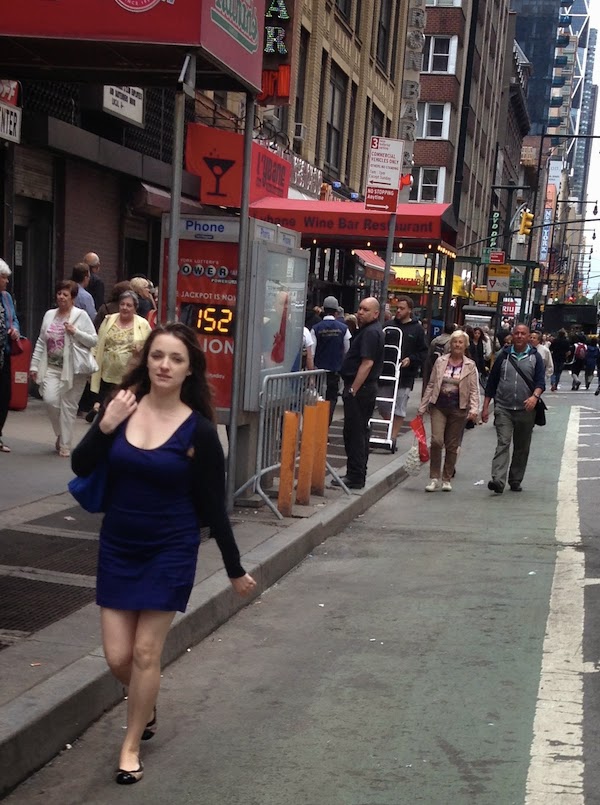 You: Middle-aged balding man on a Citi Bike sweating through your t-shirt.

Me: Brunette in a blue dress sashaying beneath the awning of the combination Nathan's/Subway/Church's Fried Chicken.

Care to meet up for a World Famous Beef Hot Dog, or a Flatizza™, or a Double Chicken N Cheese Sandwich, followed by a relaxed evening of bike lane foot-salmoning as fast food oil seeps from our pores and our skin glistens beneath the lights of Times Square?

If so, describe the exact location of your sweat rings so I know it was you.

Yeah, I don't know what Delia Ephron was talking about, because New York City's bike infrastructure has "rom-com" written all over it.  It's a veritable lovers' lane: 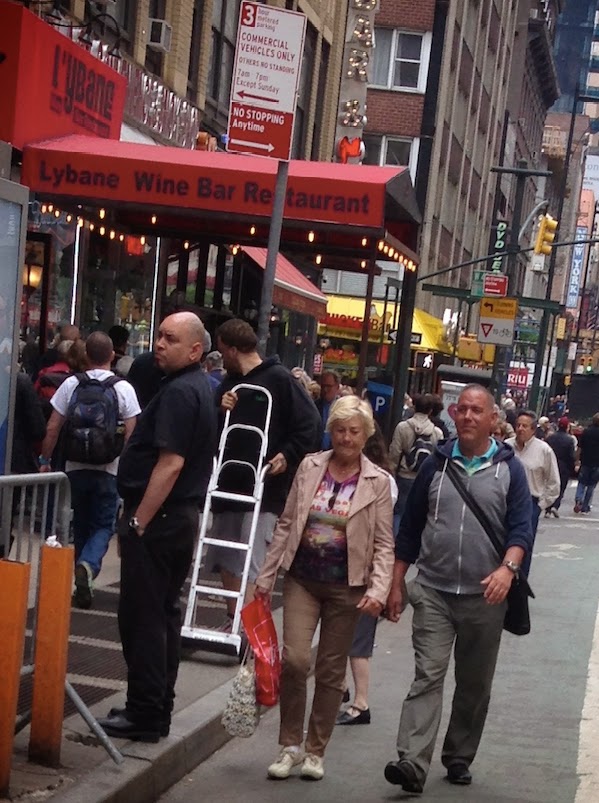 Delia Ephron would have you believe that the unsightly hue of my Citi Bike would drive them apart, but if anything my presence only strengthened not just their love, but also their resolve to walk two abreast directly in my path.

Alas, try as I might I could not intimidate anybody.  For example, I thought Captain Combover would never move over: 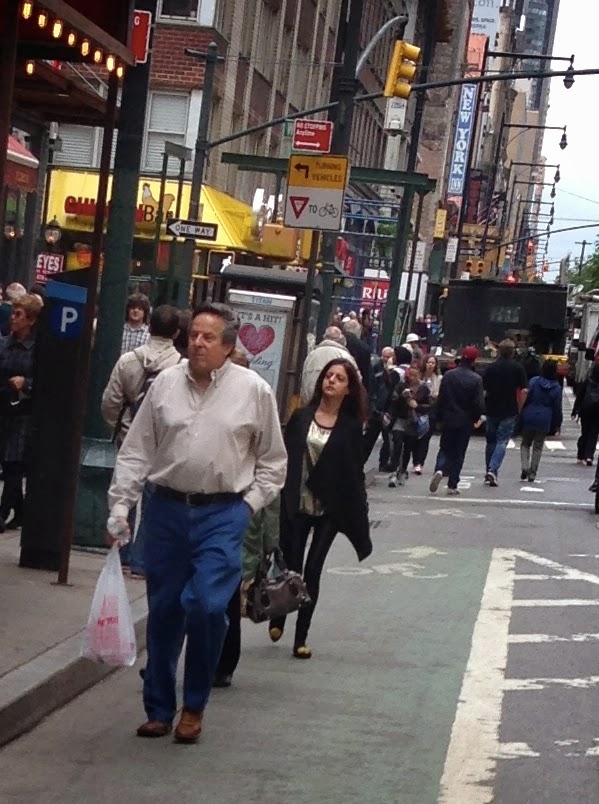 Until he spotted the "Spring Sale Event" sign in the window of the manssiere store: 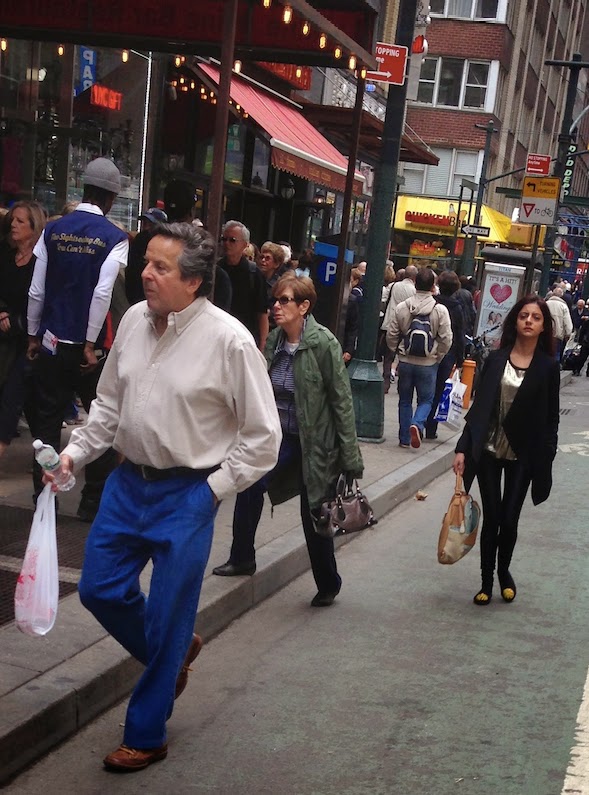 She wasn't scared either, and if anything was probably hoping I was Bill Cunningham: 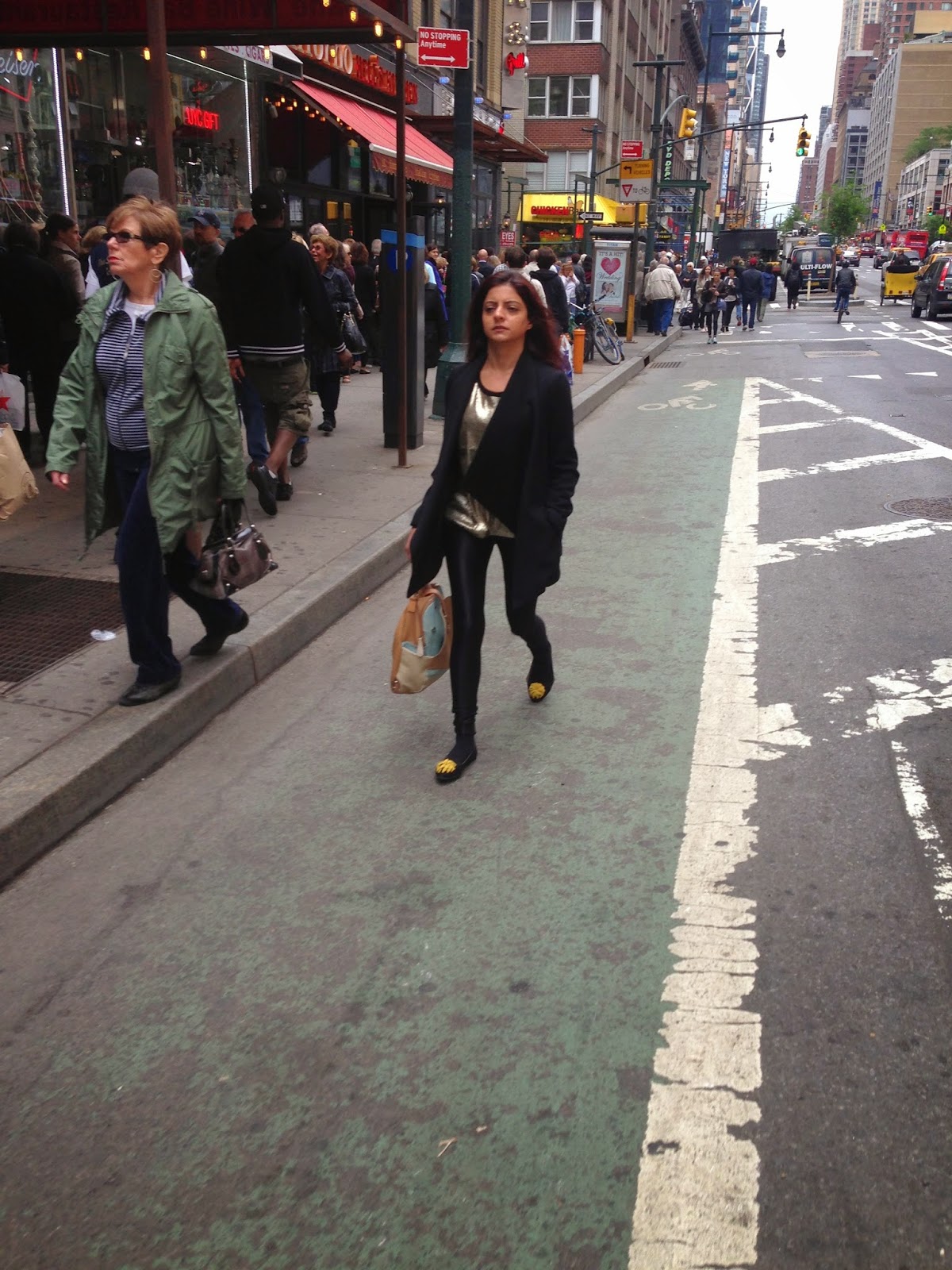 ("If I look totally aloof maybe I'll wind up in the Style section.")

Whereas this woman was so flagrantly unconcerned about all those "killer cyclists" that she was perfectly comfortable to not only walk in the middle of the bike lane, but also to rummage in her handbag while doing so: 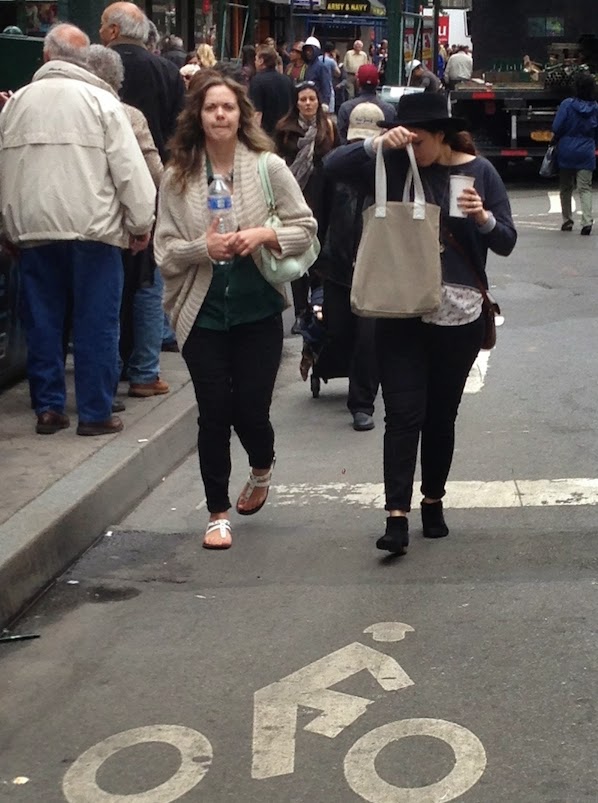 Either that, or she was sniffing her armpit: 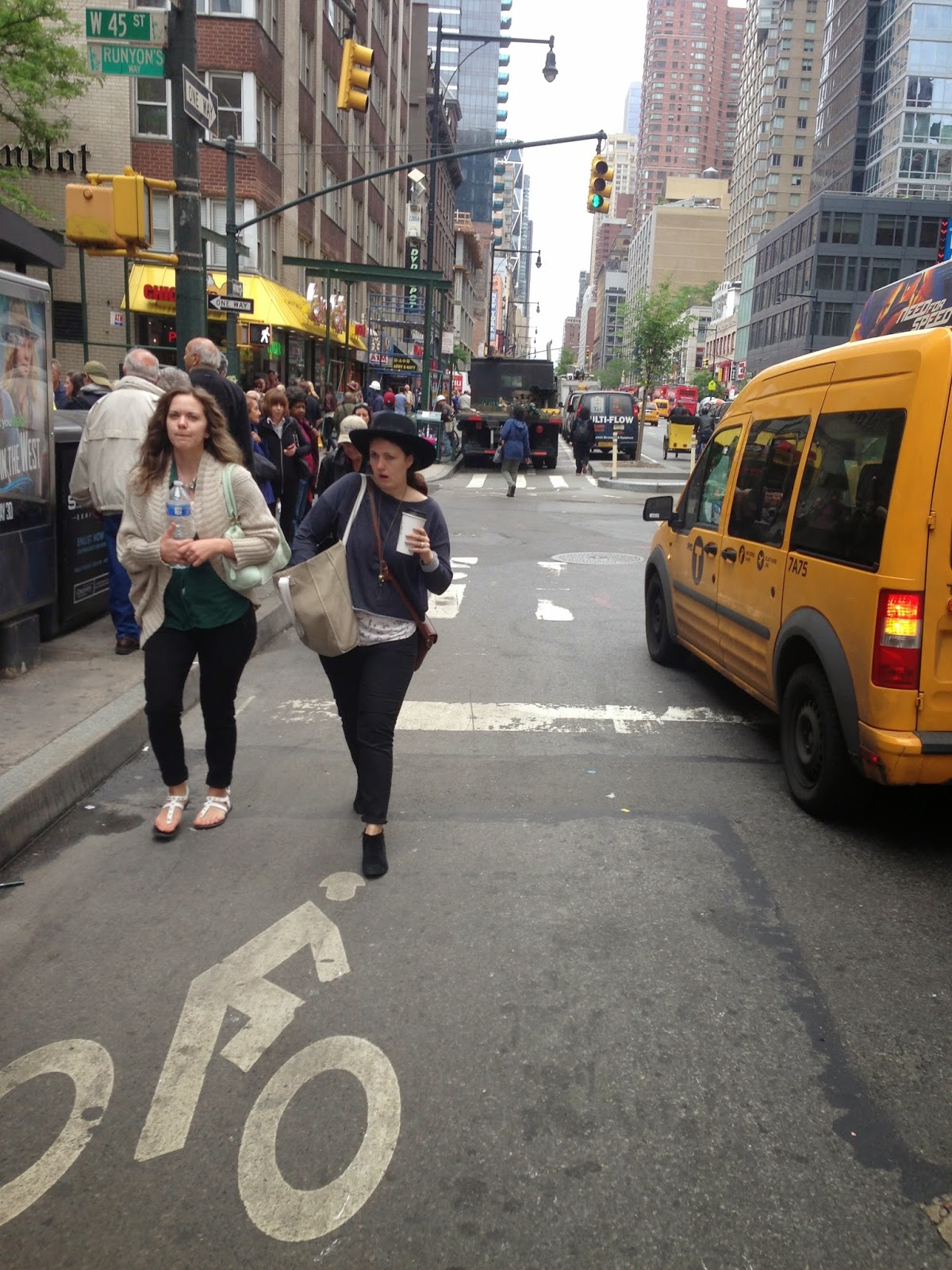 By the way, none of this is to begrudge pedestrians their lebenstraum.  We are animals after all, and as such we should be permitted to roam, like free range chickens.  I merely point this out because: 1) It's fun to take pictures of strangers; and 2) It totally undermines the false premise that cyclists are a problem in New York City.  If anything, we're treated like guests in our own home, and unwanted ones at that.  Here's a typical intersection scenario: 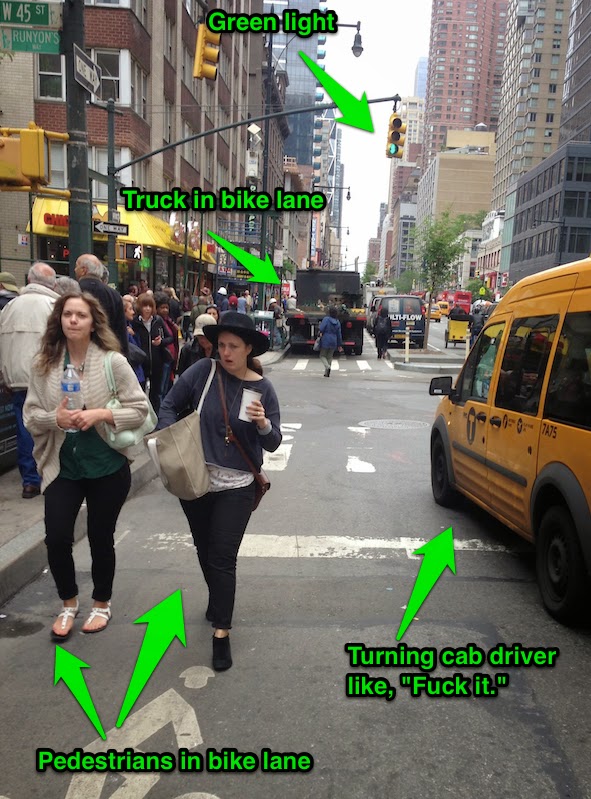 So I swing around the turning cab driver: 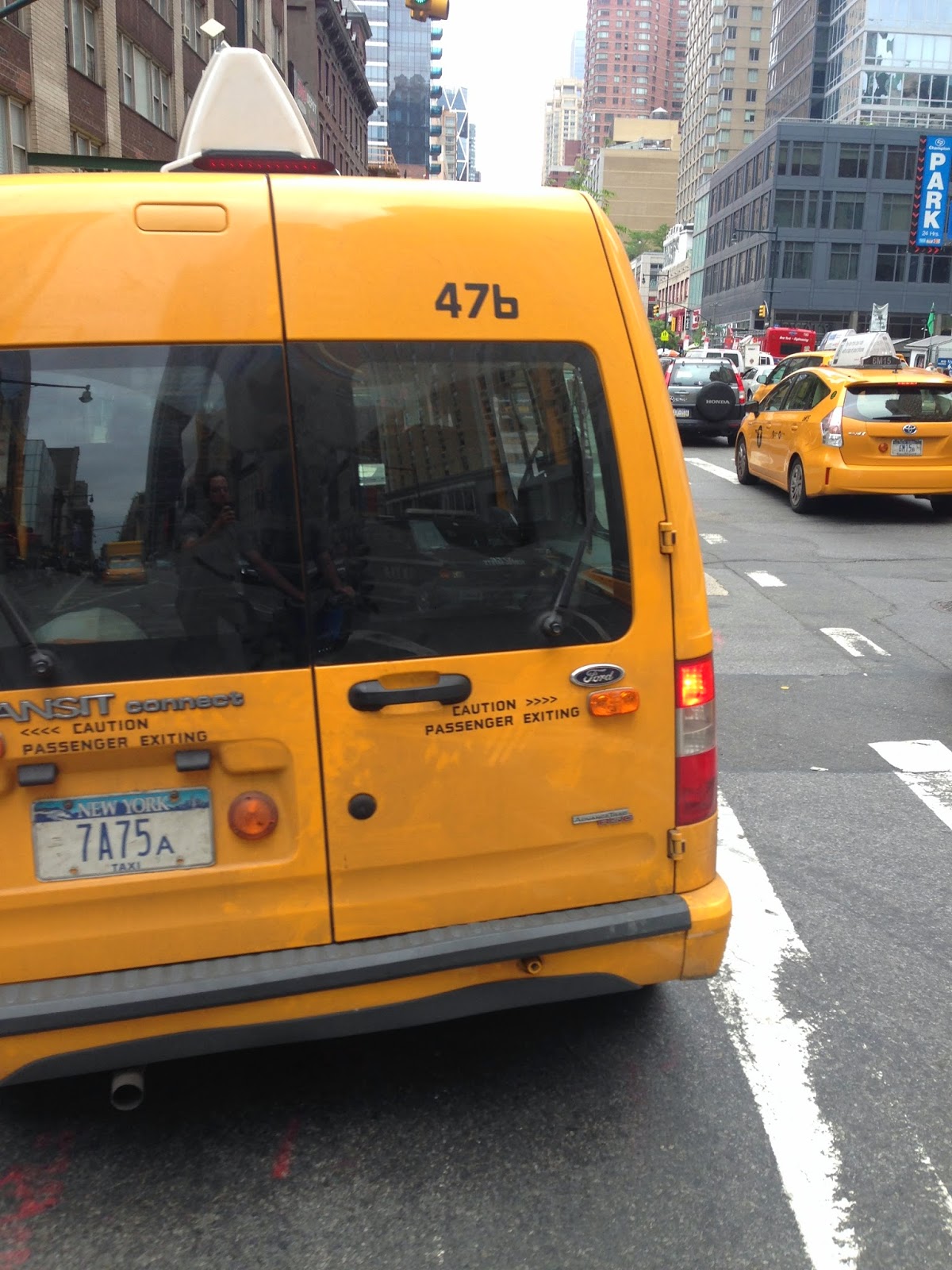 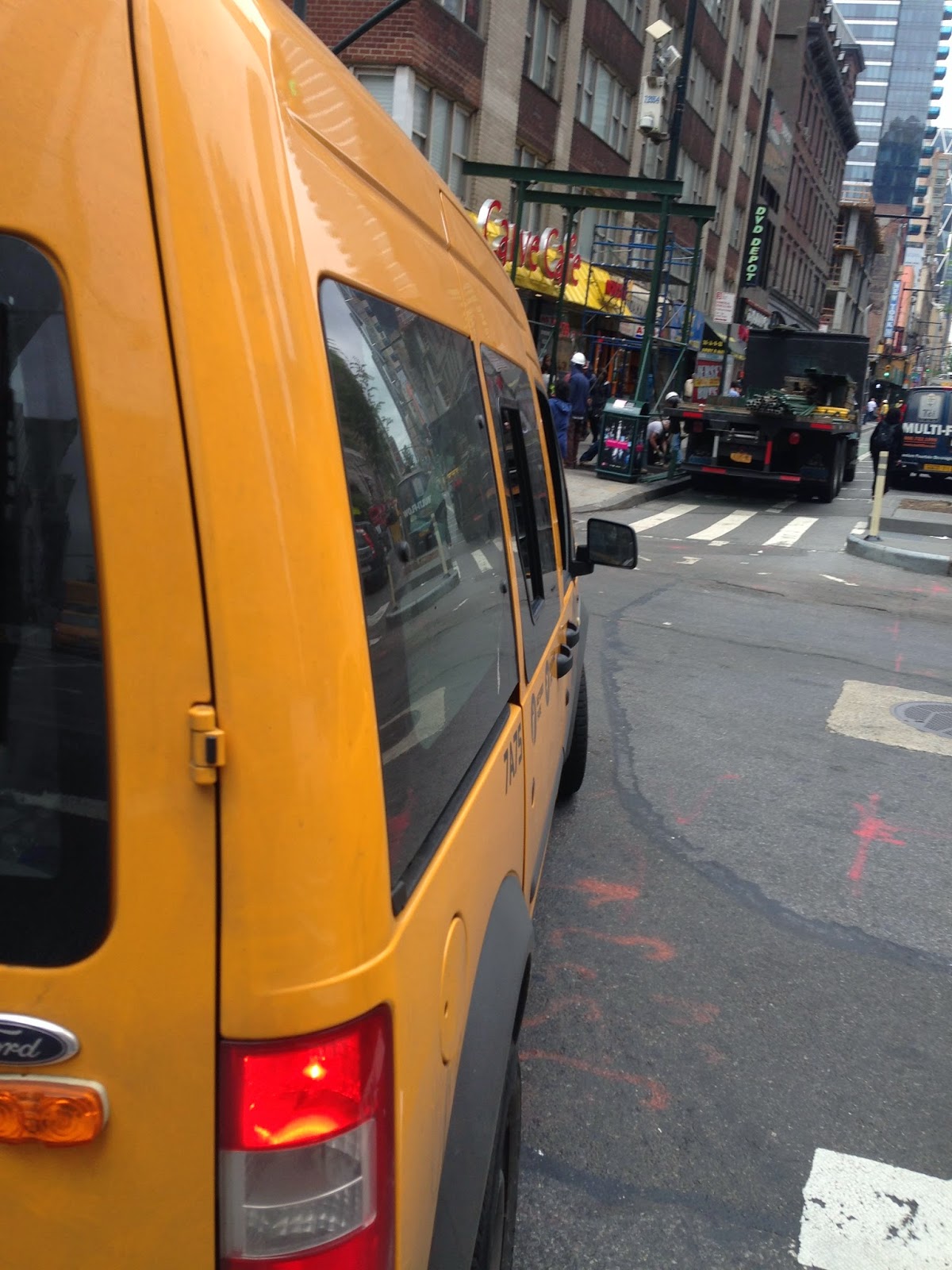 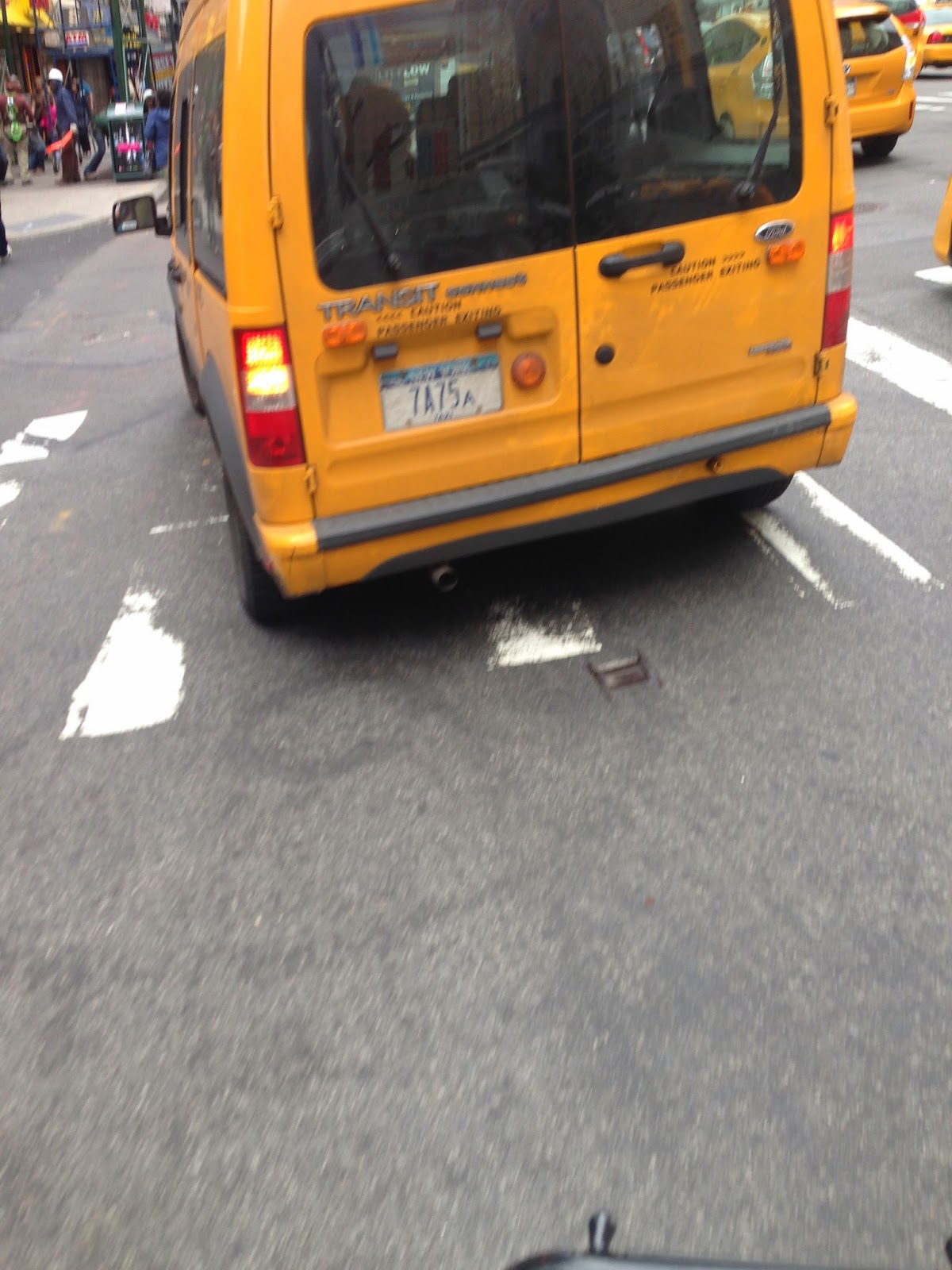 Needless to say this involves leaving the protected bike lane, which is not so much "protected" as it is "a trap," at which point another cab leapfrogs me: 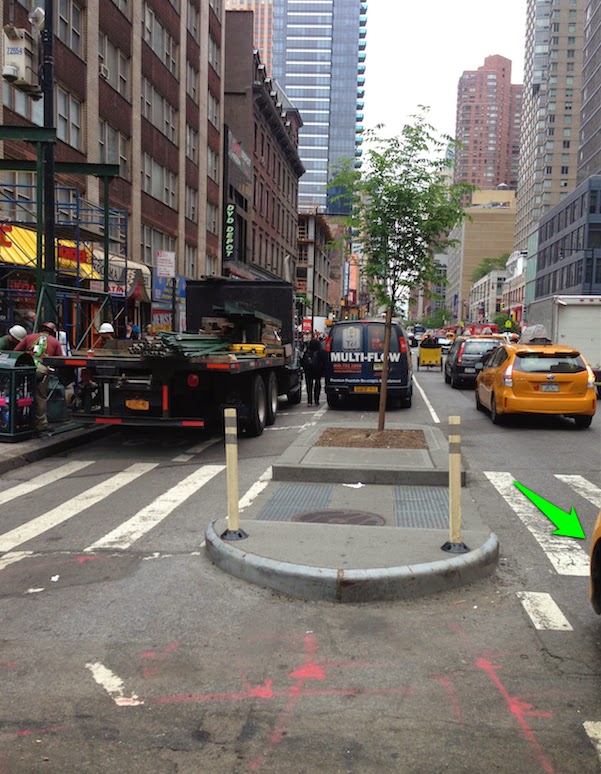 And discharges its passenger right in the crosswalk: I shot the above photo as I passed, and as I re-entered the "bike" lane (in practice they should be called "miscellaneous lanes") I immediately confronted a bike salmon and a stout pedestrian.  I attempted to photograph them both as I weaved between them, but all I got was the cockpit of the Citi Bike: 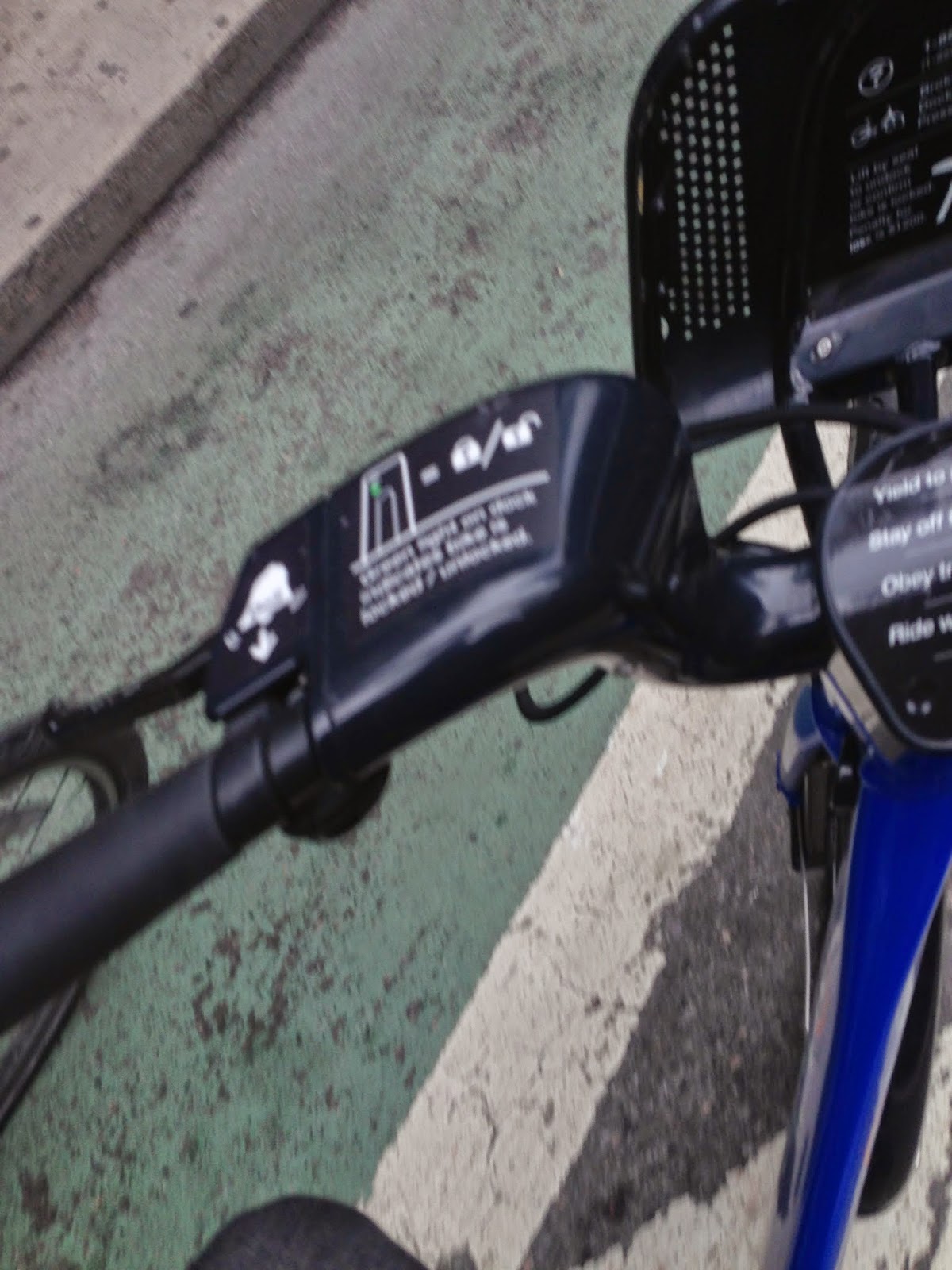 As well as this failed over-the-shoulder shot: 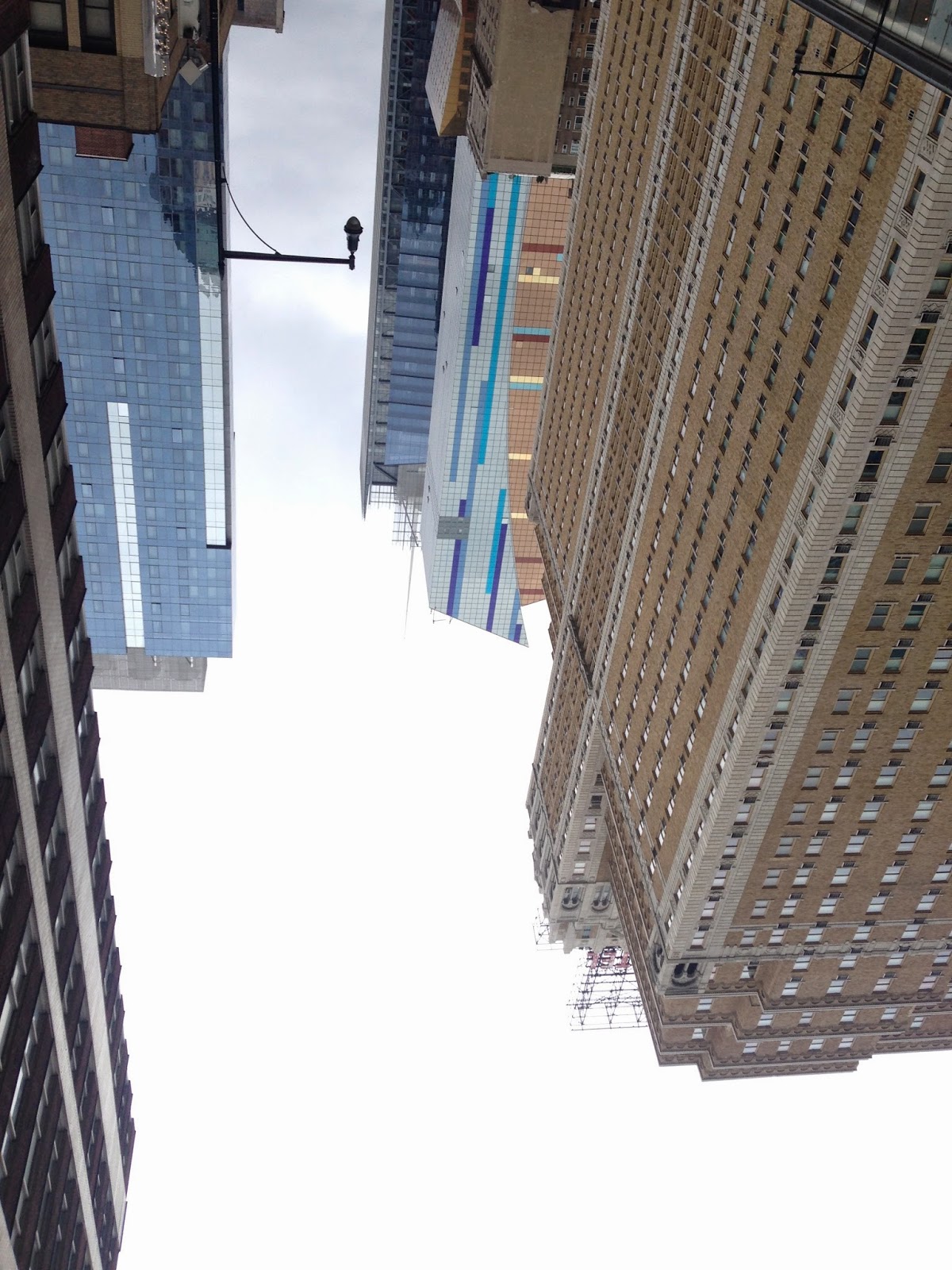 Then, eerily, the bike lane was preternaturally empty in a way that chilled me from balding pate to scranus: 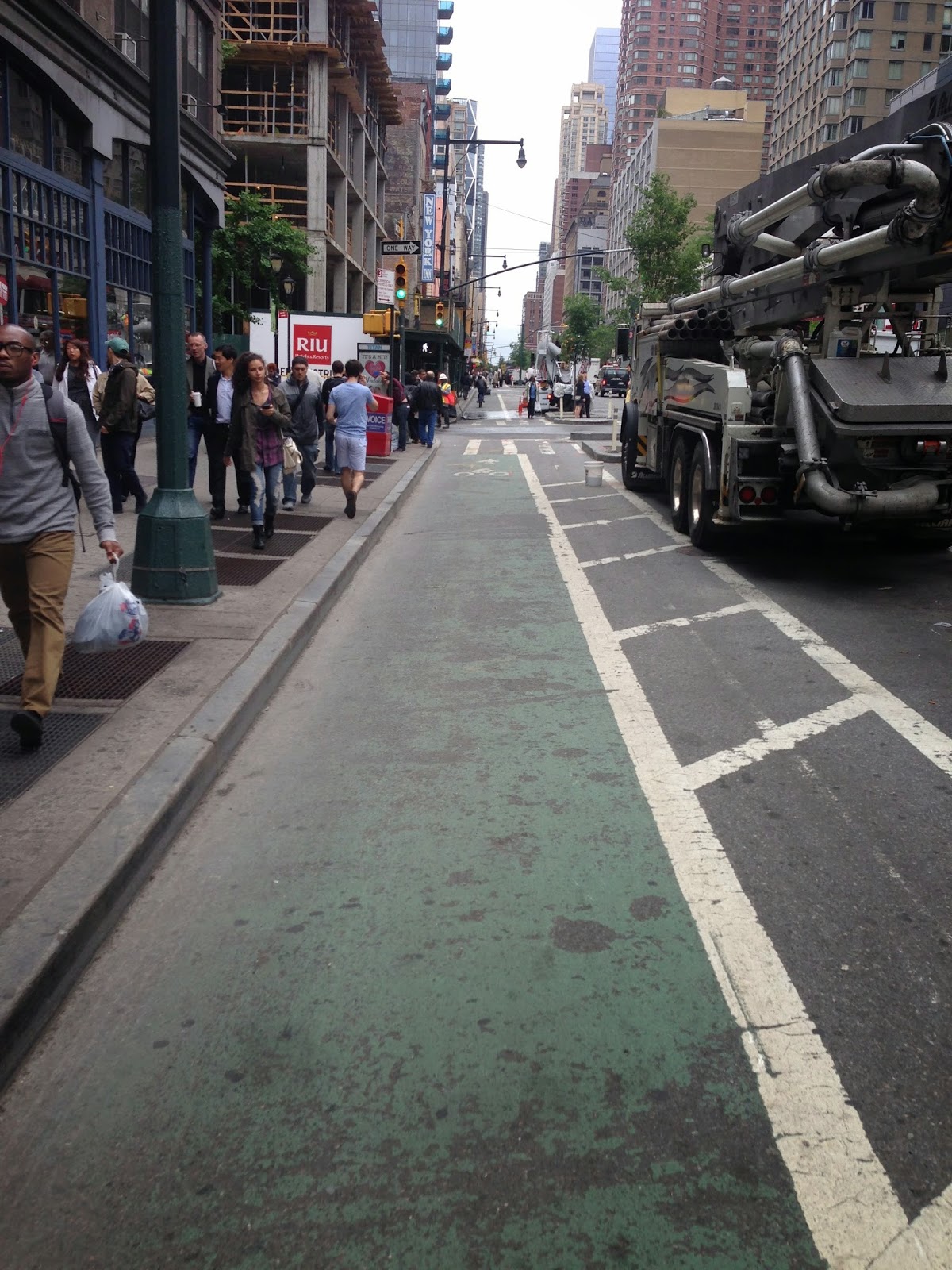 
And that's when Salmoning Skateboard Guy appeared, talking on his cellphone and wearing what appeared to be a bag around his throat.  Here he is continuing his conversation after stumbling off of his board: 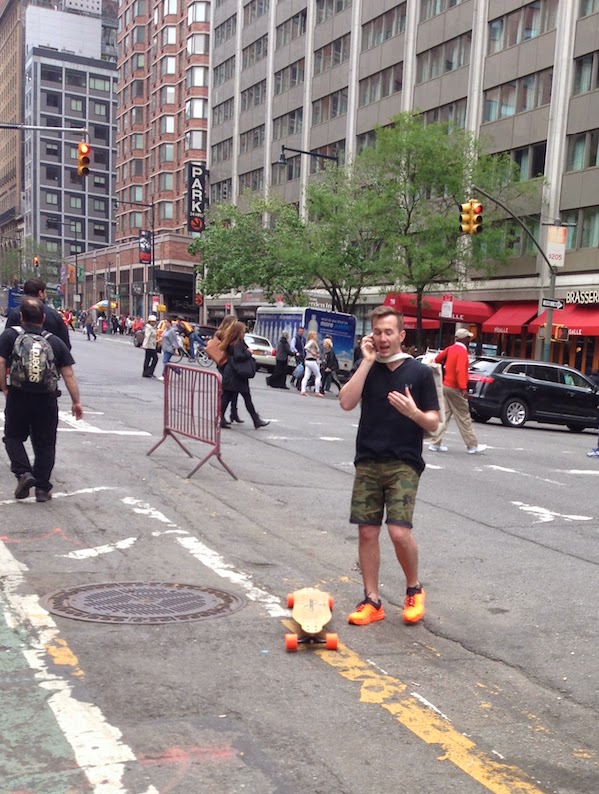 I'm still puzzling over that bag portaging method.  It seems like a really good way to snag a side mirror and get garotted.

Anyway, eventually I docked the bike and continued by foot to my final destination, which was Toga Bike Shop, where I got a new bike.  Unfortunately it's not for me, though I was tempted to hit the dirt jumps with it when the train stopped by Highbridge Park: 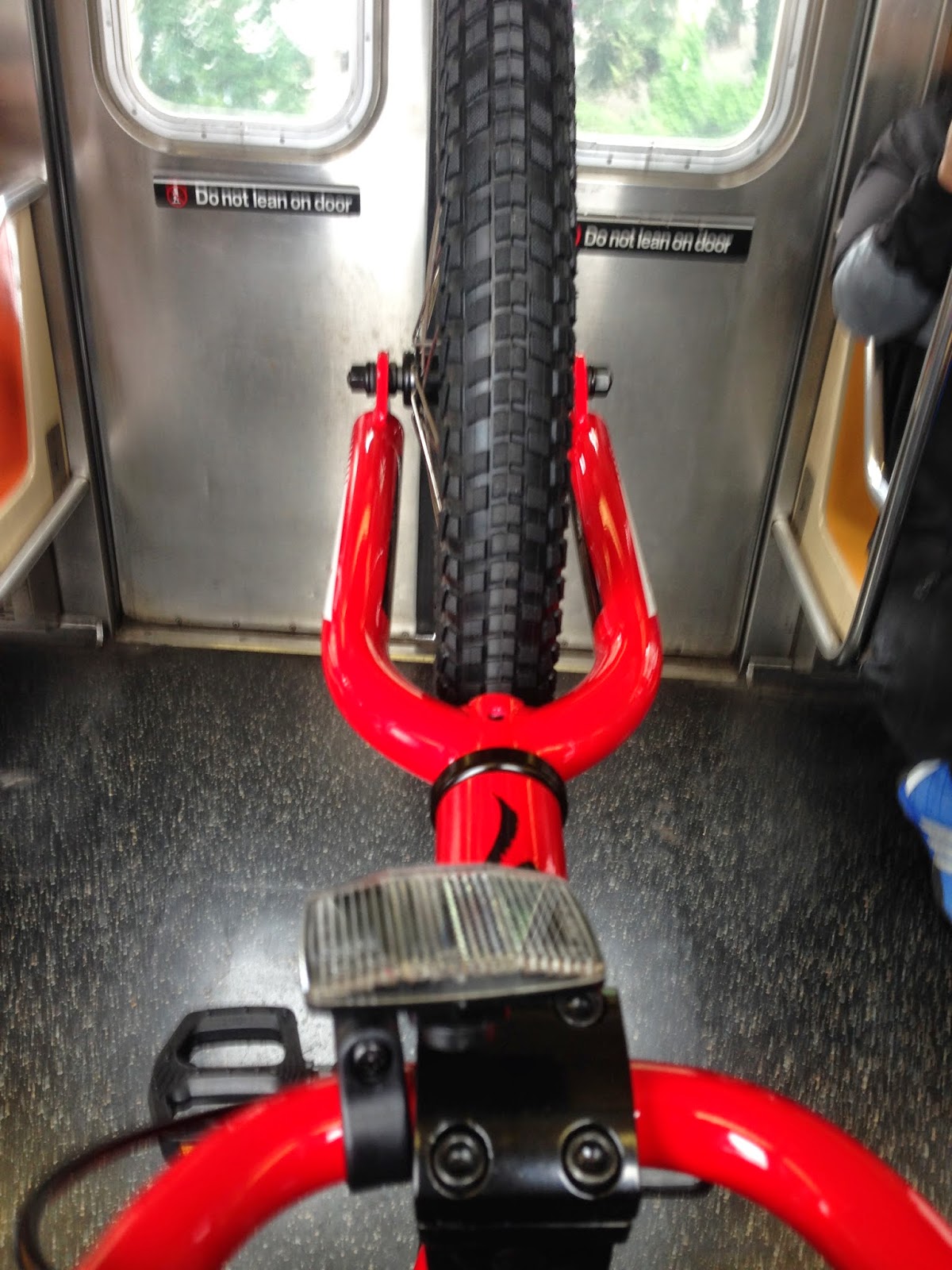 I don't know why I wanted a folding bike.  A BMX bike is so obviously the move for train travel.

Lastly, I'd like to extend to commenter Leroy my most sincerest well-wishings after his recent "dooring" (as in he got doored, not as in he doored somebody else):

Got doored on Second Avenue on the way home tonight.

Good thing I was riding a Citibike and not my own bike.

Even better luck: I cushioned the impact with my face.

Driver couldn't have been more apologetic. She's a cyclist.

Funny thing: I was wearing only a BSNYC safety hair net cap and yet somehow lived to tell the tale.

One downside: My dog won't stop the "missed connection" and "Dear Penthouse -- I never thought this could happen to me" jokes.

He's just grumpy because I told him he can be replaced now that our vision zero mayor has lifted the city ban on pet ferrets.

Isn't it funny that a driver will go out of her way to say she's a cyclist, yet if you're on your bike and you tell a driver that you're also a driver they never seem to give a crap?

Anyway, I'm glad he seems to be OK.  I'm also not going to say a BSNYC hat will protect you from evil and endow you with the gift of immortality or anything like that.

But it totally will.