Can we ever get a break?

Just three weeks after Delia Ephron unleashed the stupid with her New York Times op-ed about how we shouldn't have bike share because the color blue doesn't look good in rom-coms, that same august periodical has published another opinion piece that is, on the surface, a work of bicycle advocacy.

However, probe deeper, and it is something far more insidious even than that Ephron crap. 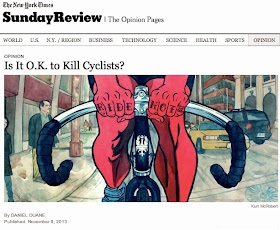 SAN FRANCISCO — EVERYBODY who knows me knows that I love cycling and that I’m also completely freaked out by it. I got into the sport for middle-aged reasons: fat; creaky knees; the delusional vanity of tight shorts. Registering for a triathlon, I took my first ride in decades. Wind in my hair, smile on my face, I decided instantly that I would bike everywhere like all those beautiful hipster kids on fixies. Within minutes, however, I watched an S.U.V. hit another cyclist, and then I got my own front wheel stuck in a streetcar track, sending me to the pavement.

Then he goes on:

You don’t have to be a lefty pinko cycling activist to find something weird about that. But try a Google search for “cyclist + accident” and you will find countless similar stories: on Nov. 2, for example, on the two-lane coastal highway near Santa Cruz, Calif., a northbound driver lost control and veered clear across southbound traffic, killing Joshua Alper, a 40-year-old librarian cycling in the southbound bike lane. As usual: no charges, no citation. Most online comments fall into two camps: cyclists outraged at inattentive drivers and wondering why cops don’t care; drivers furious at cyclists for clogging roads and flouting traffic laws.

Awful, of course.  His conclusion?

My own view is that everybody’s a little right and that we’re at a scary cultural crossroads on the whole car/bike thing.

"Everybody's a little right?"  You should be starting to get a little bit uncomfortable at this point.  Drivers are "a little right" to be "furious at cyclists for clogging roads?"  Do me a favor: tonight, at the peak of the evening rush, please head out to the BQE or the LIE or the 405 or your favorite local clogged automotive artery and find me the cyclists who are responsible for that particular clusterfuck.  In fact, find me any situation (outside of annual charity rides or actual protests such as Critical Mass, which are statistically insignificant) in which cyclists are delaying motorists by more than a handful of seconds.  Even the hated Sunday group rides that cause suburban motorists to lose their shit because a bunch of Freds are taking up the road really don't cause them any appreciable delay.  All it means is that a driver has to go 20mph instead of 30mph for a minute or two--but of course every second counts when you're headed to the shopping center for those bagels.

Meanwhile, all it takes is a fender-bender between two drivers to snarl traffic for hours.  Delays, police, ambulances, insurance claims--all because one asshole put a tiny dent in some other asshole's Hyundai.  Can you imagine if they closed 5th Avenue for half the day because a couple of pedestrians brushed shoulders and one of them spilled some Starbucks on his tie?  It's really no different.

Then he softens you up with a little more pro-bike stuff.  You forget that momentary bit of discomfort, but just when he lulls you into a state of smugness he hits you with this:

Nor does it help that many cyclists do ignore traffic laws. Every time I drive my car through San Francisco, I see cyclists running stop signs like immortal, entitled fools. So I understand the impulse to see cyclists as recreational risk takers who deserve their fate.

I am so sick of this crap where people can't say anything pro-bike in a mainstream publication without first beating the crap out of cyclists.  You "understand the impulse to see cyclists as recreational risk takers who deserve their fate?"  You just described watching an SUV run into a cyclist!  What kind of insensitive putz could possibly think anybody deserves that, or "understand" anybody who does?

Well, he doesn't.  Or not exactly.  He does seem to understand that the way things are is ridiculous, and that cyclists aren't usually at fault when they get hurt, and that traffic enforcement in this country is hopelessly skewed:

But studies performed in Arizona, Minnesota and Hawaii suggest that drivers are at fault in more than half of cycling fatalities. And there is something undeniably screwy about a justice system that makes it de facto legal to kill people, even when it is clearly your fault, as long you’re driving a car and the victim is on a bike and you’re not obviously drunk and don’t flee the scene. When two cars crash, everybody agrees that one of the two drivers may well be to blame; cops consider it their job to gather evidence toward that determination. But when a car hits a bike, it’s like there’s a collective cultural impulse to say, “Oh, well, accidents happen.” If your 13-year-old daughter bikes to school tomorrow inside a freshly painted bike lane, and a driver runs a stop sign and kills her and then says to the cop, “Gee, I so totally did not mean to do that,” that will most likely be good enough.

And yet, here's the conclusion he draws:

So here’s my proposal: Every time you get on a bike, from this moment forward, obey the letter of the law in every traffic exchange everywhere to help drivers (and police officers) view cyclists as predictable users of the road who deserve respect.

You know what?  Fuck that.  The writer does make some good and sensible observations in this piece, but this little "proposal" obviates every single one of them.  It's impossible, and in fact downright stupid, to "obey the letter of the law" on your bicycle when you find yourself in a situation where the streets and the laws are designed specifically for cars, which describes most of the United States.  Moreover, it's gone way, way past the point where cyclists should need to prove to the very people who are fucking us (that's drivers and police officers) that we "deserve respect."  We deserve respect for being human, and it ends there.  Yet we're supposed to be good little boy scouts and girl scouts--even when it's more dangerous for us to do so--to prove we're deserving of not being killed?  That's just stupid and insulting.

This op-ed reads like a homophobe defending gay marriage, but saying that homosexuals should "act less faggy" in order to earn the respect of straight people.

I know what you're thinking.  You're thinking, "Hey, why jump all over this guy?  His fundamental point is that the fact drivers are allowed to kill cyclists is wrong and that this needs to change."  Sorry, I don't care.  When you're in kindergarten and you make a fucked-up drawing of a person that looks like a Chlamydia bacterium you get praise for your effort.  However, at a certain point people begin to expect more of you.  That's why they made you "show your work" in math class.  Any asshole can guess or copy the right answer, but the important part is understanding why it's the right answer.  The guy who wrote this op-ed knows the right answer, but he doesn't understand why, and a grown-up writing in the New York Times does not deserve an "A" for "effort" when that effort is fifty percent bullshit.

And as far as obeying the law on your bicycle, here's my approach, and it's based on both respect and common sense:

--When I'm in little fantasy bubble realms like gentrified Brooklyn where there's an actual infrastructure designed to incorporate cars and bicycles and pedestrians, and where it actually makes sense to follow the law because the people who laid out the infrastructure actually realizes that cars and bikes are completely different, I'm more than happy to be a good little boy scout;

--When I'm in Midtown or some other place where I'm "sharing the road" (that's cute) and thousands of two-ton 350 horsepower motor vehicles are bearing down on me because they're driven by people whose only priority is getting to the Midtown Tunnel or the 59th Street bridge as quickly as possible, you can be damn well sure I'll do whatever the hell I need to do in order to get a head start on these homicidal mutherfuckers, and that includes running the light if I deem it safer to do so;

--When I'm in the city, I do not ride on the sidewalk.  However, if I'm in some suburban or exurban area on one of those heavy traffic routes with no shoulder that feeds into an Interstate, and there's a sidewalk, and nobody has actually walked on that sidewalk since 1963 because they're all in their cars speeding to the mall, and I feel like I need to use the sidewalk to cross that Interstate, you're goddamn right I'm going to do it no matter what the law says.  I'm going to "obey the letter of the law" in that situation to prove I "deserve respect?"  Fuck that.

In other words, I'll use bicycle infrastructure responsibly if you give it to me, but screw you if you think I'm going to pretend it's there when it's not.  And if you think I don't "deserve" the infrastructure I don't have, then you're in denial of both physics and common human decency.  The writer of this op-ed, like most Americans, has been brainwashed into believing that "drivers and cyclists share the same rights and responsibilities," as if these vehicles are even remotely the same.  Cars and bikes aren't even apples and oranges; they're 20-foot tall genetically-modified elephant/shark hybrids and oranges.  Sure, technically you can eat both of them, but the similarities end there.  But the reason people are willing to buy into the "drivers and cyclists share the same rights and responsibilities" bullshit is that it's all part of the American take on "equality," which is that it's perfectly fine to hold somebody down and fuck them, even if you've got 100 pounds on them, because technically they're free to fuck you back.  (But of course if they do actually manage to fuck you back, you charge them with rape.)

Anyway, tomorrow I'll return to less onerous matters, such as my trip to Philadelphia, and in the meantime if you need me I'll be at the store: 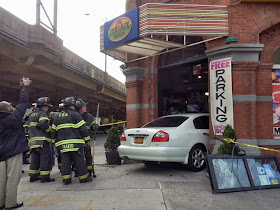 Motorists: earning your respect one collision at a time.
BikeSnobNYC at 12:03 PM