This Just In: Fetishistic Cycling Apparel Company Introduces Groundbreaking Pouch For Your Genitals! 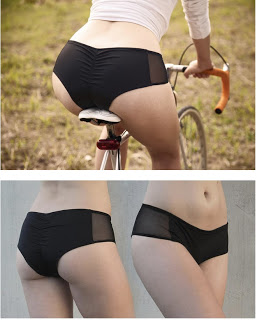 Of course you do.

In fact, since last Friday, this Kickstarter had received an additional $7,000.  I'm assuming the reason for this is that they've added a new pledge level by which, if you give $5,000, you receive a pair of panties that has been vigorously cycled in by the model for three very hot and fragrant Austin hours.

Anyway, until recently, Urbanist Cycling Chamois Panties represented the very pinnacle of crotchal engineering.  But no more!  No, when it comes to cycling products, competing with Euro-Freds (Frederiques) is a game you just can't win, and the asses at Assos have officially unveiled the World's Most Expensive Bib Short: 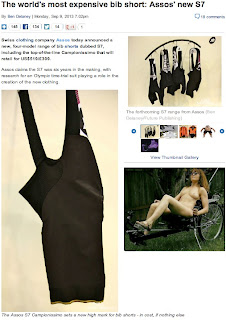 Swiss clothing company Assos today announced a new, four-model range of bib shorts dubbed S7, including the top-of-the-line Campionissimo that will retail for US$519/£309.

So what makes a pair of shorts worth over $500?  Well, a "cooling nest" for your genitals called the "KuKu Penthouse," that's what: 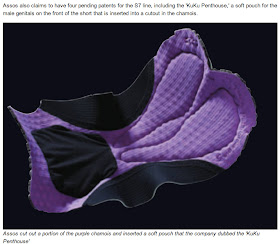 Assos also claims to have four pending patents for the S7 line, including the 'KuKu Penthouse,' a soft pouch for the male genitals on the front of the short that is inserted into a cutout in the chamois.

A "soft pouch" for your schvontz?  I thought this was a joke, but it appears to be real and it's already all over Twitter: 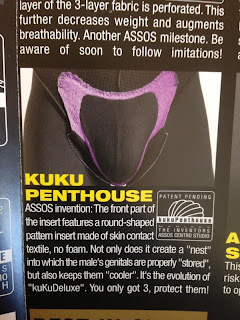 ASSOS invention: The front part of the insert features a round-shaped pattern insert made of skin contact textile, no foam.  Not only does it create a "nest" into which the male's genitals are properly "stored", but also keeps them "cooler".  It's the evolution of "kuKuDeluxe".  You only got 3, protect them!

"A 'nest' into which the male's genitals are properly 'stored'?"  This sounds like the mating process for some hitherto undiscovered mammal--particularly the part about how "you only got 3."  Last time I checked, most human males only had two testicles.  (Well, at least according to the informal hands-on poll I conducted on the subway before getting arrested.)  Apparently, however, the typical Assos customer is a strange three-balled creature whose reproductive organs run so hot he has to insert them into a "cooling nest" and hang them out like a windsock while he's riding.

Oh, here's a picture of that tri-testicled creature:

This is the face of a man whose three (3) "pants yabbies" are cool as can be inside a KuKu Pentouse: 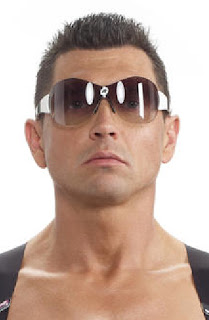 Meanwhile, here's the face of someone whose shorts are woefully lacking in "nut nest" technology: 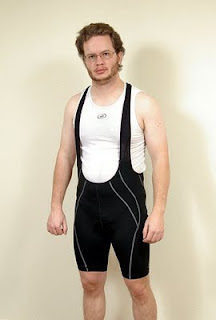 Actually, if you look closely, they have the same exact expression, only "Rider B" skipped the body wax and spray-on tan.

All right, I know what you're thinking: "The KuKu Penthouse sounds great, but what about my ass?"  Well, rest assured that in addition to a KuKu Penthouse your $519 Assos shorts also come equipped with a "Rear Terminal," and I'm completely fucking serious:

The cento also gets an unfortunately named feature called the “Rear Terminal.” It is essentially an extra layer sewn in just above the back of the chamois, intended to improve durability in that region.

This is great news for Freds who like to engage in spirited pre- and or post-ride "dry-humping," which can cause tremendous strain on the rear panel of your bib shorts, especially if the person mounting you is slathered in a spray-on tan and has got three (3) nuts.

Anyway, the real winner in all of this (besides comedy) is Rapha, who now seem like Old Navy in comparison:

Wow, "only" $220?  I'll take two, thanks, and I'll still have money left over to make my own DIY high-performance ball-cooling nest out of a pair of crotchless man-panties: 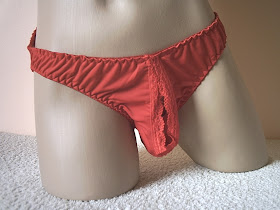 Speaking of roadies and people with odd numbers of testicles, the UCI is as dirty as an Assos "Rear Terminal" after a metric century: 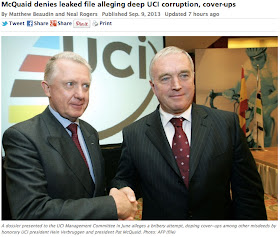 According to an anonymously leaked document — a three-page summary of a 54-page dossier that has existed since June — McQuaid and Verbruggen solicited a bribe from a team owner, bent drug-testing rules for Lance Armstrong and allowed his attorneys to review an independent inquiry into his doping, and attempted to cover up Alberto Contador’s 2010 positive drug test during their tenures as leaders of the Union Cycliste Internationale, the governing body of cycling.

Sweet sweaty Jesus nuts, could we just give this whole fucking sport to North Korea already and be done with it?  It's obvious they have an unquenchable thirst for the dregs of Western sport: 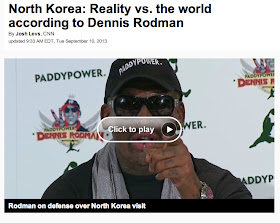 (CNN) -- In The World According to Dennis Rodman, North Korean leader Kim Jong Un, whom he just saw on his second trip to the country, is quite likable.

"He has to do his job, but he's a very good guy," Rodman said Monday at a news conference, announcing plans for a "basketball diplomacy" event that will involve players from North Korea.

I agree with Rodman, Kim Jong Un sounds like a very likeable guy:

Kim Jong-Un’s succession as North Korea’s supreme leader after the death of his father, Kim Jong-Il, has had no positive impact on the country’s dire human rights record. More than 200,000 North Koreans, including children, are imprisoned in camps where many perish from forced labor, inadequate food, and abuse by guards. Arbitrary arrest, lack of due process, and torture are pervasive problems. There is no independent media, functioning civil society, or religious freedom. Government policies have continually subjected North Koreans to food shortages and famine. Human Rights Watch is pressing for a UN commission of inquiry to investigate possible crimes against humanity in North Korea.

So if we're going to turn professional cycling over to North Korea along with Dennis Rodman I think we should start by holding the prologue of the 2014 Tour de France in Pyongang. If you think the Arch de Triomphe makes a splendid backdrop you'll thrill to the spectacle of rider after rider passing between the legs of a statue of Kim Jong-Un.  Or, perhaps they'll even design one of those time trial portals to so the riders can explode right out of the supreme leader's "rear terminal:" 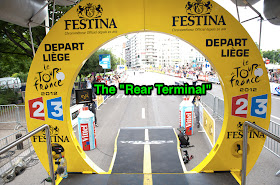 Just imagine how awe-inspiring it would be to watch the fastest cyclists in the world exploding one at a time out of a giant facsimile of North Korean dictator Kim Jong Un's asshole.

Lastly, if you're in the market for a KuKu Penthouse, no doubt you'll also be intrigued by a $33 crabon key holder (seen at Urban Velo): 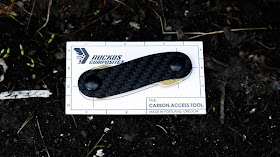 Finally, a key-portaging system light and compact enough to secret in your "rear terminal."
BikeSnobNYC at 11:27 AM