Well, So Much For That Decade...

I don't want to make too big a deal over the fact that we're on the cusp of a new decade.  I don't even want to say that this will be my last post of 2019. I mean it might be, but I also may pop in if there's a new Outside column to flog or I get a really awesome Christmas gift and I can't wait to share it.  For example, I did put this in my letter to Santa, so we'll just have to see if he delivers:

Yeah, like a road racer is going to accept the weight penalty of a vibrating saddle.

Still, despite my not wanting to make a fuss, I can't help but reflect briefly on what a significant decade it's been--for me!  Here are just a few things I pulled off between 2010 and 2020:


So yeah, life-changing stuff.  And that's not even addressing my year-end accounting from Strava: 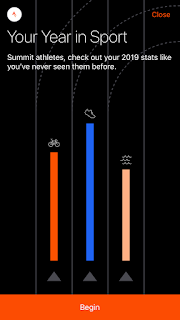 Instead of showing me stuff like how many miles I've ridden, how much time I've spent on the bike, and how many feet I've climbed, I really wish they'd give me meaningful information like how much income I've forfeited by wasting so much time Fredding about, and how much familial resentment I'm accumulating by never being around in the morning.

Hopefully they take this into advisement for next year.

As for the next decade and what's in store for this blog, I won't make any promises--except one, and that's MORE SHILLING!

The above is a comment I deleted from someone who is pathologically obsessed with my integrity for some reason.  I can only assume that my influence over them is so profound and all-consuming that they can't help but buy every single thing I mention on this blog, even $4,000 titanium frames, and I imagine them screaming, "Oh god, please no, make it stop!" as they click on the "Confirm Purchase" button with trembling hands and sweat streaming down their brow.  As for the rest of you, I trust you understand that the mere existence of a $4,000 Jones titanium frame does not require you to purchase it, and that you can also buy a complete steel Jones for half that--or even no Jones at all!

Speaking of all-terrain bicycles, check this thing out:

The new gravel bike from @Evil_Bikes -- the Chamois Hagar!!! -- is just what'd expect from such a progressive MTB company: extremely long, extremely slack, very low. Is this what gravel bikes should be like? I don't know, but I can't wait to find out. https://t.co/br41wChqty pic.twitter.com/ZrWT4ylZRR
— James Huang (@angryasian) December 16, 2019


Regardless, Evil’s own press release isn’t shy about these figures being totally removed from what people have to come expect of gravel bikes. “Most companies start with road and conservatively relax things for gravel—just enough to not stir any feathers,” it reads. “Not us. We went from full-blown mountain bike and sorta, but not really, roadied it out.

I'm not judging, but I will point out that for a long time I've been saying the gravel bike is basically the bike industry slowly reinventing the cross-country mountain bike, and I think with this bicycle that process is finally complete.  I'm also tempted to say it's kind of just a Jones made out of crabon with less tire clearance and less comfortable bars, but that's not a judgement either, and clearly the next decade is going to be one in which there will be a production bicycle for every single cycling niche you can possibly imagine.

Just make sure to wear your performance jorts: 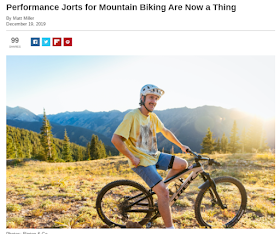 If anyone has ever put a pair of pants between a set of scissor blades and thought, “these might look cool, but I’m wasting two lower pant legs, and they are gonna chafe like a mother…,” then Ripton & Co has some good news.

The new brand, debuting from the Western Slope of Colorado, brings performance-minded jorts to mountain biking. The shorts are stretchy and offer an ethical and sustainable approach to jorts.

I've never had a problem with jorts-chafing, and the most ethical and sustainable approach to the jort would seem to be making them out of the old pants you don't wear anymore.  Neither, presumably, does the person who keeps calling me a shill, and who just ordered 10 pairs of performance jorts because I mentioned them on this blog.

Anyway, that's enough out of me.  Have an exuberant holiday season, and I'll see you next decade, if not before. 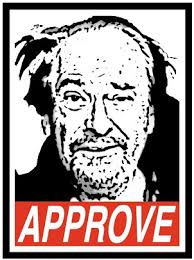