As a fatuous blogger, it is my job to seek out inane news stories, and inasmuch as this blog is sort of a feed zone of stupidity in the "epic" ride that is your day I must not waver from this purpose, even in the wake of a tragedy.  In other words, given what happened in Boston yesterday, I'm sure we could all use a little cheering up.  Fortunately, when it comes to inanity, you can always count on two groups of people: cyclists and Australians.  Indeed, as I've learned from a reader, it would appear that some people in Brisbane (Brisbanians?  Brisbanites?  Brisboners?) are being tormented by Freds who talk loudly about lovemaking: 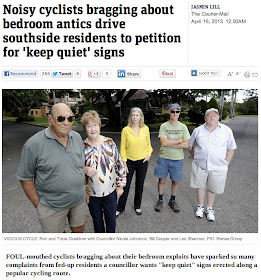 FOUL-mouthed cyclists bragging about their bedroom exploits have sparked so many complaints from fed-up residents a councillor wants "keep quiet" signs erected along a popular cycling route.

The noise begins as early as 5.30am - most of it shouted warnings to other cyclists such as "pothole" and "corner".

But some residents say sexually explicit banter is common.

"There are issues about people's work, their personal lives or who they're dating," Cr Johnston said.

First of all, if you want them to be quiet, fix the fucking potholes.  Problem solved.  Sure, there are some Freds who could find an obstacle to call out in any setting short of a perfect vacuum ("Sub-atomic particle!," shouts Hypersensitive-To-Obstacles Fred), but fixing the holes would certainly help.

Secondly, in fairness to the cyclists, it's very likely that what these laypeople are mistaking for "sexually explicit banter" is actually just innocent bike dork patter.  Consider the following wheelbuilding anecdote:

"I lubed every hole and then turned the nipples gently one at a time, bringing everything up to tension and plucking as I went.  I could feel it getting tighter and tighter, but I must have used too much lube and turned the nipples too hard, because suddenly I was sitting there with a big wet taco in my lap."

"Yeah, that's happened to me too.  Sometimes you have to go easy on the rim."

It's easy to see how a non-cyclist might interpret that the wrong way--especially if the conversation then turned to clitless pedals and dick brakes and large-diameter spindles going into beefy bottom bracket shells.

And this isn't the only way the Freds are terrorizing residents.  They're also offensive for the simple fact that they have bicycles under them instead of being inside of cars:

"You can't get past them, so I've got to find new ways to get home," he said.

Wait a minute, I'm confused.  If the cyclists are running red lights then how are they holding you up?  They keep going, you stop.  If anything, they'd cause much greater delay by stopping for the lights, because then you have to wait for 10 or 15 Freds to click back into their pedals, and there's always at least one or two who can't get back in, or who forgot to downshift, and before you know it the light's red again.  Really, it's better for everybody if they don't stop in the first place.  And what's the big deal with them riding three abreast anyway?  Three side-by-side Freds--even ample ones--are still narrower than a single car.  Someone should tell this person that if he's looking for a new way to get home, he should try riding a bicycle.

Then the whole rant just degenerates into a bunch of indecipherable Australianese:

"There's no doubt there are some great big boofhead blokes in some of these groups so we want other riders to say 'hey, pull your head in mate'."

Erected?  Abreast?  Boofhead blokes pulling their heads in?  All of these complaints seem way more lurid than whatever it is these Freds are talking about--especially when you consider how few Freds are actually having regular sex in the first place.

Meanwhile, in the world of professional cycling, something about BCR-Pizza Hut-Powerade and doping: 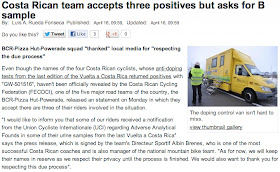 This story made me sick to my stomach--not because of the doping, which they all do, but because it mentions Pizza Hut and Powerade in the same sentence.

Of course, no news titillates Freds more than the release of a new road bike group, or "groupo," or "gruppo," or whatever they're called, which is why the new SRAM Red blabityblah, complete with hydraulic braking (or "hydrolic breaking" in Internet Forum-ese) is going to give them all a raging "group-on:" 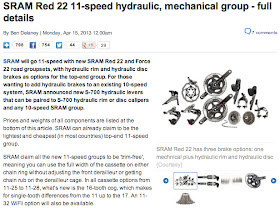 I just feel bad for those Brisbanians when the Freds start rolling through and talking about how that big bulbous knob feels in their hands: 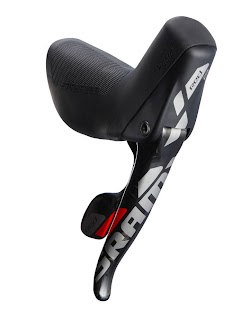 Fred #2: "Surprisingly comfortable, though it is easier to get my hand around it without gloves."

Clearly they're going to have to erect a lot of signs.

In other tech news, VeloNews's Lennard Zinn continues to field frantic questions from neurotic Freds (yes, I realize when you mention "Freds" that the neuroses are implied, but I get paid by the word): 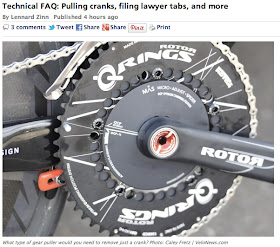 Dear Lennard,
I’m a lawyer and I don’t file my lawyer tabs. Not because of liability concerns, though. The reason is the crash I witnessed during a Roubaix-style road bike race when the rider three bikes ahead of me heard a clanking noise and upon lifting up his front wheel to check it, pulled the wheel right out of the fork, which yes, had its lawyer tabs filed. He no longer has any of his original front teeth.
—Tre

Dear Tre,
Youch! I have seen people with loose skewers lift their front end after stopping, only to have their wheel fall out. One of them turned quite pale, having just completed the descent into Silverton, Colorado in the Iron Horse Bicycle Classic with his wheel loose enough to fall out.

To lift up on the front end while moving when you hear a suspicious rattle is an ill-advised strategy, whether it is due to a loose skewer or something else. It’s a good idea always to stop and then check it out.
―Lennard


In other words, there are people out there who actually hear that their front wheel is loose, think to themselves, "Something is wrong with the front end of my bicycle," and then do exactly the thing that causes a wheel to come out of a fork.  That's like seeing a sign that says "Thin ice" and saying to yourself, "Huh, I better jump on it and see."  Fortunately, there's a good litmus test to determine whether or not you can safely file off your "lawyer lips," and here it is:


Have you ever eaten food without checking the expiration date and gotten sick afterwards?

If you answered "yes," then don't file off your lawyer lips!

I also enjoyed this question:


Removing paint from a carbon frame
Dear Lennard,
I am considering purchasing a carbon frame on sale with a hideous paint scheme. Is there a safe way to remove the paint and either leave it as bare carbon or re-shoot to spec? And if left as bare carbon, is that a good or bad thing? I want to avoid a spray over as not to add more weight, whatever that may be.
—Paul

Wow.  Paul is clearly the exactly the sort of person who should not be filing off his lawyer lips.


Moving on to cultural news, a Tweeterer informs me that retail douchefest The Brooklyn Flea is coming to Philadelphia: 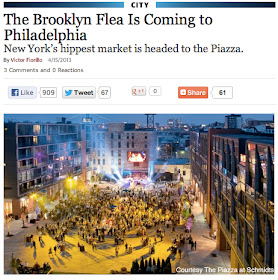 If you’ve spent any time in New York City in recent years, you should know that the five-year-old Brooklyn Flea is one of the coolest places you can possibly find yourself on a Saturday. Everyone from Martha Stewart and Neil Patrick Harris to Usher and Anne Hathaway have shopped at “The Flea,” deemed “one of the great urban experiences in New York” by the New York Times, and its food vendors have become so in demand that they’ve spawned a separate food market, the wildly popular Smorgasburg. Mario Batali is a huge fan.

That was the most powerfully dissuasive and stomach-turning paragraph I've read in a long time.  It actually makes Pizza Hut and Powerade seem appetizing in comparison--just like the crowd at the Brooklyn Flea makes Portland look diverse: 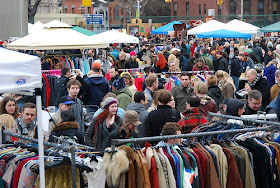 Lastly, judging from the comments on Streetsblog, the new smugness metric in New York is how low your Citibike member ID number is:

Solid starting position.  I'm totally going to get the holeshot.
BikeSnobNYC at 12:58 PM