The Indignity of Commuting by Bicycle: Doing the Right Thing

In yesterday's post, I mentioned an eBay auction for a disembodied crabon bicycle frame headtube, which you can see here being sensually caressed by a disembodied hand: 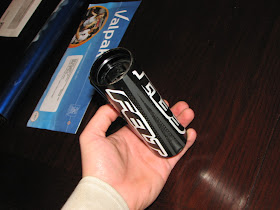 (A headtube in hand is worth two in the bush.)
Well, apparently my mentioning it generated considerable interest, for this morning I noticed the following question:

Q: Do you know if this item is fixable? Can it be ridden?

A: No I'm afraid it would not be ridable in it's present condition, you could email calfee for a quote on repair, let me know if you need high resolution pictures to send them....
While I suspect the question was posed in jest, I also have no doubt that Craig Calfee would gladly accept the challenge of restoring this poor headtube to rideability. Most likely he would graft it onto a bamboo frame, though it's possible that the bamboo tubing might not accept the transplant due to the unsustainable nature of the crabon and the incompatible smugness blood types of the two materials. I can imagine the poor frame on an operating table, the EKG showing disturbing patterns as Calfee in full surgical scrubs attempts to defibrillate it. "Why, why?!?," he'd cry, pounding on the operating table as the EKG flatlined. "We did everything we could," he'd then explain to the distraught owner, presenting the headtube to him like a veterinarian returns a dead hamster to a weeping child.
Speaking of yesterday's post, I also mentioned the NYPD's ongoing bicycle crackdown: 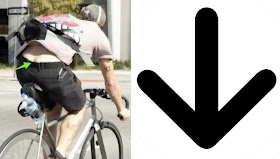 And the local snarkrakers at Gothamist now report that a rider has been ticketed for not wearing a helmet:

Of course, children and commercial cyclists are required to wear helmets in New York, but non-commercial, non-child adults are still free to forego their "safety kippahs" and bare their pates to the almighty Lob on high. Now, it's possible that the officer was confused by the law which requires all motorcyclists to wear helmets, but it's also possible he was just an idiot, and indeed his ticket "curation" would support the latter hypothesis: 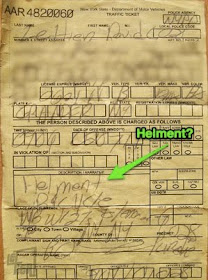 Either that, or else New York City is so determined to discourage cycling that it's inventing new components and accessories, making them mandatory, and then punishing us for not using them. If this is the case, then by the springtime you can expect to receive tickets for any one of the following infractions:
--Not wearing a helment;
--Not having a belb or other aubidle signal on your hangledabs;
--Failure to signal before executing a relft turn;
--Missing or poorly-maintained zummers, flunnels, spazzims, sneedles, or fizzamawizzamadills;
--непривлекательными или отсутствуют гениталии
Meanwhile, yesterday afternoon I was also afforded a unique opportunity to test the NYPD's alleged ruthlessness. My route took me through Brooklyn's Prospect Park, and as I exited the park I encountered a police car waiting at a red light: 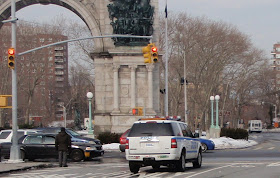 "Ah-ha! Expect me to run the light, huh? Well, you won't catch me that easily," I foolishly thought, not yet having learned of the new helment law. In fact, not only did I not run the light at which the police were sitting, but I also didn't run the crosswalk light like 50 feet away, so successfully have I been gelded by the "man:" 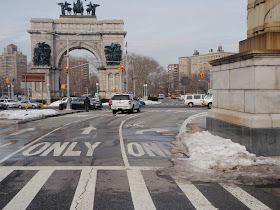 As I sat there scratching my flunnels and musing about nothing in particular, a hipster or hipster-like being rode past me on a Pista. "This should be interesting," I thought as he approached the police car: 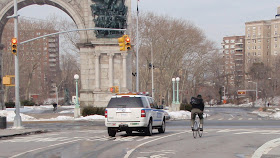 Once at the red light, he performed what appeared to be a botched trackstand: 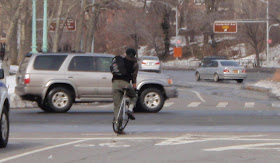 And then, spying his opening, he ran the light right in front of the police and entered the Centrifuge of Death that is the Grand Army Plaza traffic circle: 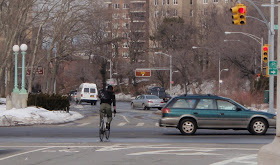 I braced myself for the flashing of lights, and the whooping of sirens, and the booming of the loudspeaker. "You on the bike! Pull over!," the officer would demand, knocking the hipster to the floor and beating him about the zummers and sneedles. But it was not to be. In fact, the police were utterly disinterested in both him and the salmon who you can also see to the left of the vehicle: 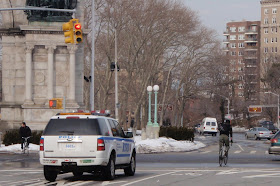 This perplexed me. On one hand, the painfully smug denizens of Streetsblog and the Tweeter hashishtag "#bikenyc" have been crying harassment for weeks now, yet I counted at least four declined invitations for harassment on the part of the hipster. On the other hand, the NYPD has claimed that the crackdown is for the cyclists' own safety, yet there are few things less safe than running a light into Grand Army Plaza, which is a deadly churning maw of Flatbush dollar vans and Park Slope Subarus and Crown Heights "Mitzvah tanks" that would make even David Byrne (who doesn't own a car) say, "Fuck it, I'm leasing a Kia." Meanwhile, I'm waiting at a red light in front of an empty crosswalk like a schmuck, wondering, "Just what the hell do you have to do to get a ticket around here?!?"
Equally perplexing was this bumper sticker that I saw a little while later: 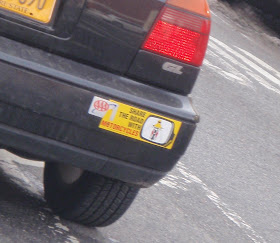 "Share the road with motorcycles," it said, and I thought to myself, "A-meh to that, my two-wheeled sibling!"--until I noticed that he was sitting in the bike lane and that as far as he was concerned the bicyclists could go fuck themselves: 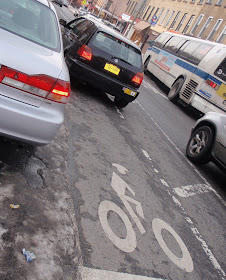 Sure, it's not as incongruous as the classic "fixie" with a "One Less Car" sticker on the back of a Mercedes: 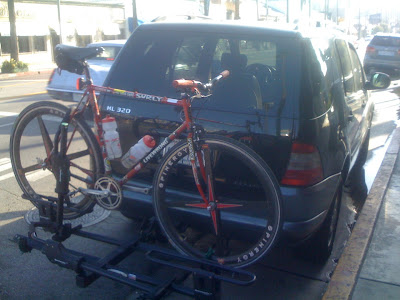 But it was vexing nonetheless.

From there, I navigated onto the Sands Street bike lane, a raised and protected affair that was supposed to herald a new era of bike-friendliness when it was installed back in 2009, and which as of yesterday was obstructed by one cable company van, one unmarked police car, and a salmon: 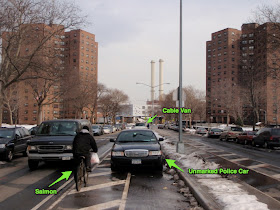 Apparently the salmon could not be bothered to travel the additional three feet to the other side of the bike lane, nor was he ticketed by the police--though I think the Time Warner guy may have hooked him up with free cable.
So what is the reward for cycling through the slush-filled, contradictory streets of New York? Well, if you simply love to ride then the riding, however irritating, is ultimately its own reward. However, if that's not enough for you, there's also the approbation of the "We're so special!" set. Last week I mentioned that Time's Up were giving fake tickets and congratulating cyclists for crossing the "Big Skanky," and indeed I received one of these spurious and saccharine summonses on my own return trip yesterday. My first warning was this banner: 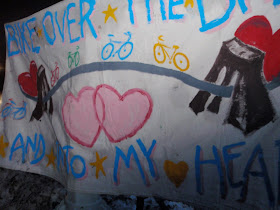 And then came the officers in the shiny hats: 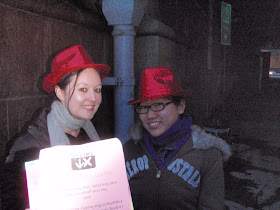 I asked them why I warranted all this attention, and while I couldn't hear their response due to the rumblings of the subway train overhead I did hear something about how I was "Doing the right thing" by riding my bike. I'm not sure why from a moral standpoint I was any more "right" than the people on the train currently passing above us, but I suppose it probably had something to do with the "environment"--which is ironic, since the entire purpose of my trip into the city had been to burn tires and kill ducks. Anyway, while they congratulated me for doing absolutely nothing, their colleagues posed by this banner: 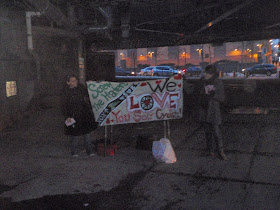 Then, the light changed and I headed onto the Sands Street bike lane, which of course had a police car sitting in it: 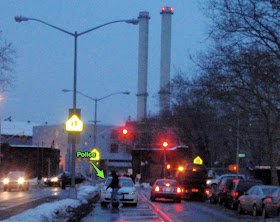 I braced myself for a ticket for consorting with environmental activists in shiny hats, but it was not forthcoming, and when I got home I examined my "Token Ticket of Love:" 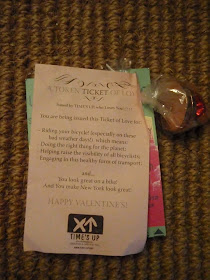 Clearly they gave me the wrong ticket, since even though I was wearing Rapha pants with "epic" babyfood stains on them, under no circumstances do I "look great on a bike." In fact, I plan to contest this ticket in smugness court and at least get the charges knocked down to "shlubby dork on a Scattante." The ticket also included an invitation to their "dance party," which I will be attending just as soon as I complete a Grand Tour "grand slam" on a unicycle: 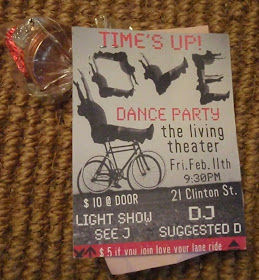 Also, they included non-kosher, non-Hanukkah gelt chocolate coins in the JFK presidentway, presumably as an implicit protest against their arch-enemies, the bike lane-hating Williamsburg hasidim: 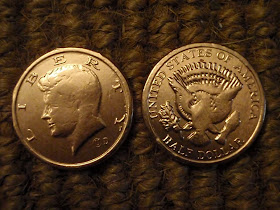 I hope that foil is sustainable.
BikeSnobNYC at 8:06 AM