This morning I off-fucked for a ride because I'm a bike blogger goddamn it and if you can't take a ride once in awhile then what the hell is the point? 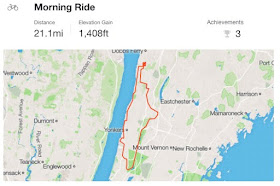 As you can see from my Strava, the ride was wholly unremarkable in both distance and duration, though it was quite enjoyable nonetheless.  I find that 20 miles is the ideal distance for the busy cyclist in that it's short enough to work into your day yet long enough to make you feel like you did something.  To that end I have established sort of a basic loop I use, and then I season to taste with various climbs and dirt sections depending on my mood.  This allows me to maintain my tenuous grip on sanity's pinky toe, though I'm always a missed ride away from losing it altogether.

By the way, there's a little dongle on the ride where I briefly considered taking a different route but then changed my mind, doubled back, and returned to my usual one: 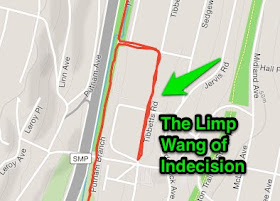 Conditioning is a powerful thing.

Anyway, all that aside, there was one remarkable aspect of today's ride, which I will relate forthwith.  I was rolling out on the South County Trailway, which is a paved multi-use converted rail-trail thingy that looks like this: 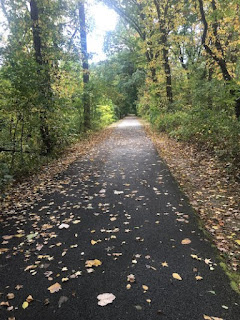 Indeed it was just after my little detour, and as I rode I came upon someone "walking" at least six nearly identical large brown dogs while riding a skateboard.  Due to the large number of canines I assumed he must be a professional dog walker, though usually they're walking a wildly disparate array of dogs: a great dane, a dachshund, a Bassett hound, a chihuahua, a poodle, and so on.  This guy's dogs however were completely interchangeable (no, I don't know what kind they are, I'm not a Dog Fred), so either he specialized in large brown dogs or else they were all his own and he was practicing his dogsledding.

As you can imagine, Nanook the Schook and his team were taking up the entire width of the path.  Furthermore, owing to the gradual rise in the path, he was moving very slowly on his skateboard, pushing with his right foot, then switching quickly to his left, and then reverting to the right again.  It was a pathetic display.

Nevertheless, I always strive to be polite to a fault when sharing these sorts of paths, and so as I approached I searched my brain for the proper phrase with which to announce my presence so that I might pass him.  Of course "On your left" simply wouldn't do, and "Mush!" might cause his dogs to bolt, so clearly I had a lot of thinking to do.  In the meantime, while I curated just the right phrase, I figured I might as well hang back and take a photo of this profoundly selfish tableau.

Naturally, as a recovering Fred I keep my phone in a Ziploc baggie, and so it took me a few moments to fish it out.  Finally, just as I did, the skateboarding dog walker turned around, looked at me, and then went flying into the air as though his board was spring-loaded.  Now I don't know if this is because he was startled to see me, or because he'd hit a stick or some other obstacle (the pathway was loaded with them), or some combination of the two, but as he hit the deck and tumbled it occurred to me that it would be ungentlemanly of me to take a picture under these circumstances and so I slipped it back into my pocket again.

All of that is a roundabout way of saying I have no photos of this event whatsoever, which is why I have been forced to recount the tale using prose.

Anyway, once he'd righted himself I of course asked if he was OK, and he said he was, and that was good enough for me so off I went.  Also, as far as I'm concerned I believe I have no culpability in this incident, but if you feel differently please feel free to let me know.

Moving on, here's the definitive video feature on helme(n)t etique(n)tte:


For the record, I was appalled by the suggestion that you should hang your helmet from the doorknob while using the restroom, since everybody knows you should always wear your helmet while relieving yourself in cycling shoes at all times:

Come to think of it, walking on a tiled floor in cycling shoes is probably the most dangerous thing you'll do on your ride.